CREW scientists in the Plant Research Division work to propagate and preserve threatened plants from across the United States. Our work contributes to Target 8 of the Global Strategy for Plant Conservation: “At least 75 percent of threatened plant species in ex-situ collections, preferably in the country of origin, and at least 20 percent available for recovery and restoration programs.” We work to conserve plants in our ex-situ collection, CREW’s CryoBioBank and to provide plants to restore populations in the wild. 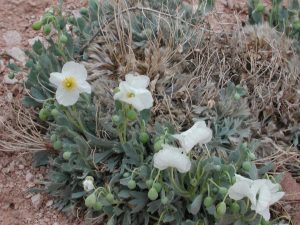 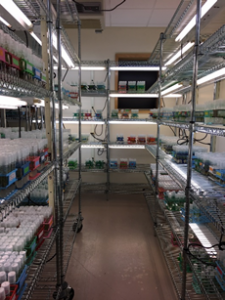 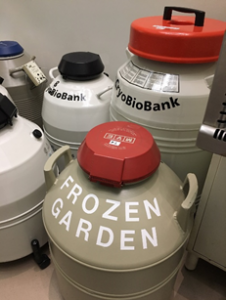 The CREW Plant Division focuses on Threatened Exceptional Plants (TEPs) or those threatened plant species for which seed banking is not an option for long-term ex situ conservation.  Ex-situ conservation is the conservation of plants away from their native habitats.  It includes growing plants in places like botanical gardens as living collections or conserving the species as seeds in a seed bank. Seed banking is a very effective and efficient method for preserving plant genetic diversity for long periods of time in a small space. However, not all species are adapted to the methods required for current conventional seed banking. 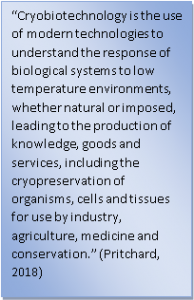 When seeds are banked, they first must be dried to a very low moisture level (something most seeds are adapted to doing in nature), and then the dried seeds are put into a freezer and kept at -20oC (-4oF), where they will last for many years.  An example of large seed banks of wild plant species is the Millennium Seed Bank Partnership in England, the European Native Seed Conservation Network (ENSCONET), the collaboration of the Center for Plant Conservation in the United States with the National Laboratory for Genetic Resource Preservation (USDA), the National Seed Bank Partnership in Australia, and the Germplasm Bank of Wild Species in China.

Exceptional species, however, are plants that will not survive the conditions of seed banking, are short-lived in seed banks, or they have no seeds available to the bank.  Fortunately, there are other methods that can be used to preserve exceptional species, including cryobiotechnology, which combines the methods of cryopreservation with in vitro biotechnologies.  These methods are used in the CREW Plant Division to propagate TEPs and store them long term at -196oC (-321oF) in liquid nitrogen in CREW’s CryoBioBank.

To learn more about some of the species the CREW Plant Lab is working, expand one of links below.

The Come-Back of the Autumn Buttercup

The Plant Division at CREW has been involved in the restoration of the endangered Autumn buttercup (Ranunculus aestivalis) which, when it was discovered, had very few plants to produce seed.  Read more about its amazing come-back below and view the video of the last outplanting here.  View short video interviews of the restoration team members here.

The come-back of the Autumn buttercup is a story of teamwork, science, and perseverance! 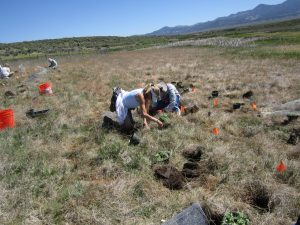 The yellow-flowered Autumn buttercup was first discovered in one location in the Sevier River Valley in south central Utah in 1894 and was only seen once in the 1940s before being found again in 1984.  It was listed as federally endangered in 1989 and soon after, The Nature Conservancy purchased the site to help preserve the species, fencing the land to eliminate grazing.  However, the population continued to decline to about 20 plants.

In the mid-1990s, CREW’s Plant Division was given a few seeds, and these were germinated in vitro (in plant tissue culture), and the shoots were used to establish tissue culture lines for propagating Autumn buttercup plants.  Once propagation protocols were developed, CREW was asked to be part of a team of institutions that was working to restore the Autumn buttercup population.  The team consisted of The Nature Conservancy, U.S. Fish & Wildlife Service, The Arboretum at Flagstaff, CREW, and, first, Utah State University and later Weber State University. 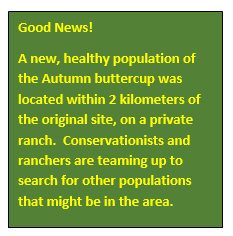 The first outplanting of 136 CREW-propagated plants took place in 2007.  The cause for the decline was unknown, but one theory was that the site, which is a wet meadow, was becoming drier and so buttercups were planted in wetter and drier areas.  Surprisingly, the plants in the wet area died within a year, while the plants in the drier area survived longer, although they eventually began to decline as well. 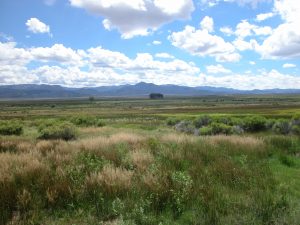 In 2010, a second outplanting of 45 plants was done, but when the plants were checked after a few weeks, they had all been eaten by hungry voles!  An evaluation of the site indicated that because grazing had been eliminated, the site had become overgrown by sedges and rushes, which provided perfect habitat for voles, and the small mammal population had increased substantially.

In 2013, it was decided to allow limited grazing on a portion of the site to reduce the vegetative cover that had altered the ecology of the area. Close to 350 plants from CREW were planted, some in the grazed area and some on ungrazed land.  In addition, each plant was protected by a metal mesh bag around the roots to protect it from voles, and some had cages to protect the shoots of the plant from cattle grazing until the plants could become established.  This time was a success!  More plants survived on the grazed site than the ungrazed site, and more of the caged plants survived than uncaged.

The last outplanting took place in 2017 when 900 plants were planted!  600 of these were produced through tissue culture by CREW and 300 were produced directly from collected seed, and the survival of these will continue to be followed.  Even as these plants were being planted, Autumn buttercups from the previous outplantings were blooming in the meadow!  The site is well on its way to the goal of a 1000 healthy, reproducing plants! 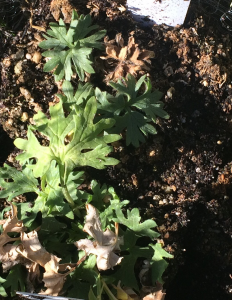 The research on developing the propagation protocol for the Autumn buttercup was funded in part by a grant from the Institute of Museum and Library Services, in collaboration with The Arboretum at Flagstaff, and the Center for Plant Conservation.

Cumberland Sandwort plants have been propagated using tissue culture, and these methods have been used to produce plants that have been outplanted in the Daniel Boone National Forest.  This experimental population has demonstrated that Cumberland Sandwort plants produced through tissue culture can be used to produce a viable population in the wild.  Tissues have also been banked in CREW’s Frozen Garden.

Shoot tips collected from wild plants in Akron, OH, were used to initiate plant tissue culture lines of Northern Wild Monkshood.  This population has been particularly vulnerable to salt run-off from a nearby road and an invasive species.  Tissue culture-propagated plants were produced in the Plant Research Division of CREW and were given to collaborators at Gorge Metro Parks to augment their population at risk.

Avon Park harebells is a small legume (Fabaceae family) that is known from only three populations in south-central Florida.  It is specifically adapted to the sandy scrub habitat of the Lake Wales Ridge, an area that is home to a variety of unique plants and animals.  Because this land is desirable for development and agriculture, much of the original habitat has been lost. Of the three known populations of the Avon Park harebells, two are protected and one is not.

The unprotected population is in the city of Avon Park, in undeveloped housing lots.  CREW has collaborated with researchers at Archbold Biological Station (ABS), located near Lake Placid, FL, who has studied and monitored this species for a number of years.  CREW’s Plant Division has developed in vitro (tissue culture) propagation methods for this species and has used those methods to propagate plants from the unprotected population.  Young partially acclimatized plants were sent to collaborators at Bok Tower Gardens in Lake Wales, FL, for further acclimatization to the Florida climate.

In August 2012, 84 plants propagated by CREW and Bok Tower Gardens were planted by ABS researchers at a protected site.   All of the plants died back, but as of March 2013, a number of the plants were starting to regrow.

This is encouraging, indicating that the methods used for propagation, including in vitro methods, produced plants that are adapting to the new location, and that these methods could be used to produce further plants for restoration.  CREW researchers are also working to cryopreserve tissues of this species, for long-term storage in CREW’s CryoBioBank.

This collaboration in restoration, between the CREW Plant Division, Bok Tower Gardens, and Archbold Biological Station, with funding from the U.S. Fish & Wildlife Service, is helping to bring the unprotected genotypes of the Avon Park harebells into a secure future.

The original work in developing in vitro propagation and cryopreservation protocols for this species was supported in part by grants from the Institute of Museum and Library Services.

Roughly one-quarter of all the species targeted in the Threatened Plant Propagation Program are from Florida.  Collaborators at Historic Bok Sanctuary, Fairchild Tropical Botanical Garden, and the Marie Selby Botanical Garden work with CREW to identify species for which propagation at CREW could make a difference in the long-range conservation of the species.  Targeted species focus on threatened species from scrub and pine rockland/hardwood hammock habitats and include a variety of woody species,  perennials, orchids, and ferns.

To learn more about other areas of CREW’s plant research: