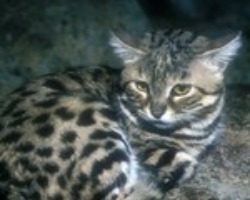 In the Northern Cape Province of South Africa, field studies have found fairly high densities of black-footed cats in some areas – with up to five cats per square kilometer of land. Given such relative abundance and the open terrain typical of the thornveld, catching wild black-footed cats for scientific studies would appear to be a simple proposition. But, as CREW scientists found during their initial field survey in South Africa, black-footed cats may have other ideas. In a research project being conducted in collaboration with the McGregor Museum, San Diego Zoo, University of Illinois and Wuppertal Zoo, wild black-footed cats are being live-trapped to collect blood for disease and dietary analysis and semen for sperm banking before release back into the wild. That first night in the field resulted in the capture of one adult male, the cryopreservation of 15 straws of semen and the subsequent release of one feisty little cat. Three more weeks of trapping, however, yielded only foxes, mongooses and other small mammals. Subsequent field excursions over the last few years have incorporated night spotting and netting of wild cats into the capture repertory with improved results. To date, a total of 12 cats (8 males and 4 females) have been captured and released, permitting the cryopreservation of 97 semen straws for subsequent importation to the U.S.

With grant funding provided by the Morris Animal Foundation, CREW recently characterized the basic reproductive biology of the black-footed cat for the first time, using techniques such as fecal hormone analysis and semen collection and evaluation. Semen samples collected from cats in this zoo-based study also were used to assess different methods for cryopreservation as well as the development of in vitro fertilization procedures with frozen semen. This new knowledge should allow us to use the frozen samples from wild black-footed cats in South Africa for in vitro fertilization and embryo transfer with the zoo population, producing genetically valuable offspring without bringing more males into zoos.