The Sumatran rhinoceros is one of the most endangered animals on Earth with fewer than 80 individuals surviving in the world. Also known as the “hairy rhino” because of its hairy body, the remaining wild Sumatran rhinos are scattered throughout fragmented rainforests in Southeast Asia, making it difficult for the animals to find each other and reproduce.

Through their research, the Center for Conservation and Research of Endangered Wildlife’s (CREW) scientists have become world experts on the reproductive physiology of Sumatran and Indian rhinos. In an effort to increase animal numbers and improve genetic diversity, CREW uses science and technology to achieve numerous reproductive breakthroughs in these highly endangered Asian rhinos. 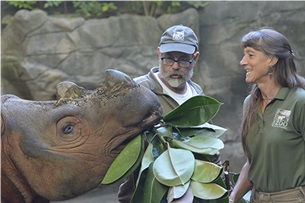 Two males born at the Cincinnati Zoo, Andalas and Harapan, have been relocated to the Sumatran Rhino Sanctuary in Indonesia to give them a chance to contribute to the survival of their species by breeding with females there.

“The Cincinnati Zoo has been committed to saving the Sumatran rhino for 25 years, and this move only strengthens that commitment,” Thane Maynard, Executive Director of the Cincinnati Zoo.

There are fewer than 80 Sumatran rhinos left on the planet. Four of them are from Cincinnati. See how the Cincinnati Zoo is trying to save this amazing species (via WCPO). View story here. 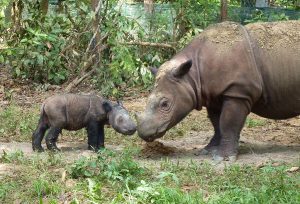 Though Sumatran rhinos no longer reside in Cincinnati, the Zoo remains committed to their conservation, providing financial support and staff expertise to facilitate the Sumatran rhino breeding program at the Sumatran Rhino Sanctuary (SRS). Built in 1996 by the International Rhino Foundation, the 250-acre sanctuary is overseen by Yayasan Badak Indonesia, or the Rhino Foundation of Indonesia. Located in Way Kambas National Park on the island of Sumatra, the SRS is home to the only reproductively viable Sumatran rhinos in human care in the world. The rhinos reside in large, natural rainforest habitats and receive state-of-the-art veterinary care and nutrition. The rhinos living at SRS serve as ambassadors for their species, and as founder group that could one day provide animals to revitalize the wild population. 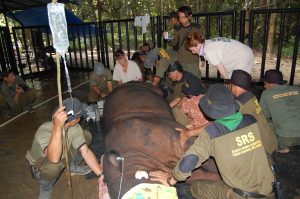 Scientists with the Zoo’s Lindner Center for Conservation and Research of Endangered Wildlife (CREW) unraveled the mysteries of breeding Sumatran rhinos over a decade ago, and by sharing the information and techniques, success has been replicated in Indonesia. CREW scientists and Zoo animal care staff frequently travel to SRS to offer expertise, training and assistance with the breeding program. Two males born at the Zoo, Andalas and Harapan, have been relocated to SRS to give them a chance to contribute to the survival of their species by breeding with females there. To date, Andalas has sired two calves at SRS, a male named Andatu in 2012 and a female named Delilah in 2016, and all are hopeful that Harapan will follow suit in the near future. CREW scientists are also assisting the SRS team in developing a Sumatran rhino sperm bank that currently contains samples from both Andalas and Harapan that can be used for artificial insemination or in vitro fertilization attempts if such efforts are warranted and appropriate for saving valuable genes of this species. 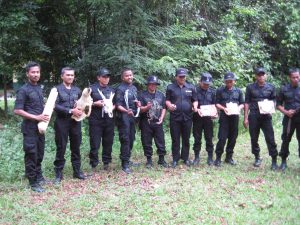 The Zoo also helps support Rhino Protection Units (RPUs) that are trained to protect rhinos from poachers who desire rhino horn for use in traditional Asian medicine. In the two national parks where the RPUs operate, Way Kambas National Park and Bukit Barisan Selatan National Park, no Sumatran rhinos are known to have been poached in recent years.

The RPUs patrol the parks to deter and investigate any illegal activity as well as remove traps and snares they discover. At the same time, they document any sightings, footprints, feces or other evidence of rhinos, tigers and elephants to help monitor the populations of these endangered species.