All females and youngsters temporarily in one gregarious group 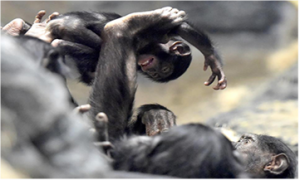 CINCINNATI, OH (November 3, 2015) – Cincinnati Zoo & Botanical Garden visitors will have the rare opportunity to witness all of the female bonobos & their babies together in one big group now through November 15.  The super group includes two new females “Lana” and daughter “Kesi,” mothers “Zanga” and “Kimia” and their youngsters “Zeke,” “Clara,” “Kibibi” and baby “Bolingo.” With new faces to explore, bodies to groom and disputes to settle, the bonobos will be busy in their indoor exhibit.

“Bonobos are extremely gregarious, seeking the company of others of their kind and, unlike other apes that tend to be more cautious and sometimes aggressive when joining each other initially, diffusing tensions through embracing, extra vigorous grooming and sexual behavior,” said Cincinnati Zoo Curator of Primates Ron Evans.

The temporary grouping is a transitional step toward placing Lana and Kesi, recently brought to Cincinnati from San Diego Zoo on a breeding recommendation from the Association of Zoos and Aquariums’ (AZA) Species Survival Plan (SSP), with 42-year-old male “Vernon.”  Bonobos are rare in Zoos and critically endangered in the wild, making thoughtful population management key to the survival of the species.  Vernon is a founder animal, making his genetics acutely valuable.

With only 90 bonobos in North America, housed in seven Zoos, individuals must be shifted between institutions in order to ensure the genetic diversity of the population in human care, meet the animals’ need for varied social interactions, and to learn more about their behavior. Four bonobos from the Cincinnati Zoo were transported to San Diego Zoo prior to bringing Lana and Kesi to Cincinnati.  Two other bonobos from Cincinnati were sent to Japan in 2014 to participate in an educational initiative by Kyoto University to study memory in non-humans.

“It’s expensive and logistically tricky to move animals, especially when we’re talking about managing them on an international level. We do it because we’re committed to cooperative, proactive collaboration and doing whatever it takes to boost the bonobo population in the wild and in our institutions,” said Evans.

Formerly called the pygmy chimp, the bonobo is slightly smaller than the common chimpanzee. Their diet consists of fruit, seeds, leaves, flowers, fungi, eggs, and small animals. Bonobos stand between 2.3 and 2.8 feet, and can weigh as much as 86 pounds.

The few bonobos left in the wild occur in the Democratic Republic of Congo (DRC). They are considered one of the most endangered of the great apes. Bonobos are human’s closest living relatives, sharing over 98% of the same DNA. Next to humans, they are the most intelligent animal on the planet.  Zoos across North America, Europe, Japan and the DRC are working to help save bonobos in the wild by learning all they can about them at home. They are inspirational ambassadors for their wild counterparts.