“Preemies have very tiny and unstable veins, and even though our vet team was able to get multiple IVs placed, the veins could not sustain the IV and would blow,” said curator of mammals Christina Gorsuch. “Lucky for us, we’re right next door to a world-class facility with a whole department dedicated to working with difficult veins.”

Two VAT team members came to the zoo with sensitive ultrasound equipment and placed an IV catheter in Fiona.  That first line lasted about 30 minutes and then the vein blew.  Not giving up, the team gave it another try and placed a life-saving IV catheter in one of her deep leg veins. Zoo vet staff has been with Fiona around the clock to monitor that valuable IV since it was placed on Friday afternoon.

“Five bags of fluid later, Fiona is showing signs of recovery,” said Gorsuch.  “She is still sleeping a lot but has started to take bottles again and has periods of carefully-supervised activity. The catheter is still in place.” 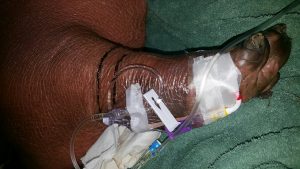 This is not the first time that the Zoo has collaborated with Cincinnati Children’s.  In 2015, Ali the aardvark was transported to Cincinnati Children’s for CT and MRI scans to get a closer look at what might be causing persistent ocular drainage.  They have also consulted on baby gorillas, polar bear pregnancy tests and more. But, a preemie hippo is a first for everyone.

“We are happy to extend our expertise to our neighbors at the Cincinnati Zoo. Like many people, we are rooting for Fiona!” said VAT Clinical Director, Sylvia Rineair.

Fiona weighed 29 pounds when she was born, on January 24, which is about 25 pounds lighter than the lowest recorded birth weight for this species.  The normal range is 55-120 pounds.  She is still a few pounds shy of 50.

The Zoo is providing updates on the baby’s condition on its website and on Facebook. For the latest, read today’s blog post by one of Fiona’s caregivers!