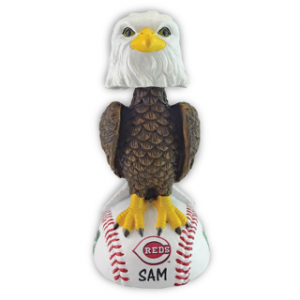 Fans can get a Sam the bald eagle bobblehead and see him fly!

CINCINNATI, OH (February 19, 2019) – The Cincinnati Zoo & Botanical Garden and the Cincinnati Reds are teaming up to offer animal and baseball enthusiasts opportunities to enjoy both at the same time this summer! Fans can visit with mascots and attend a special Q&A session with Reds players during Reds Day at the Zoo on June 17 and move the party to Great American Ball Park for Zoo Night on June 18.
One of the 2019 themed ticket packages announced by the Reds earlier this week includes an exclusive Sam the Bald Eagle bobblehead and a ticket to Zoo Night, which features appearances by animals in the Kroger Fan Zone, a parade on the field during pregame festivities, and an opportunity to see Sam soar into the stadium during the National Anthem. Two dollars from each ticket package sold will benefit the Zoo.
The Zoo’s 20-year-old rescued bald eagle will fly about 340 feet from the TriHealth Riverboat Deck in center field to the pitcher’s mound on Zoo Night and before home games on May 31, June 14, June 28, and July 3.

In addition to providing fun for families, the Zoo and the Reds have a long history of working together to make the Cincinnati community a better place.  The Zoo has provided assistance with landscaping, construction management, project coordination and maintenance for the last five Reds Community Makeover projects and is looking forward to partnering to make an impact in another neighborhood this year! 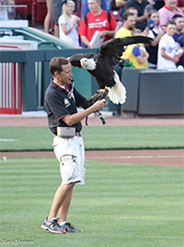 Sam’s Story:
Since Sam made his Major League debut in 2003, he has flown to the pitcher’s mound more than 50 times!  This is a spectacular achievement for a bird that was found injured by the side of the road in 1999 when he was just months old. He was rehabbed at Michigan State University, but his permanent wing damage could not be repaired and he could not be re-released into the wild.
“We brought him to Cincinnati in the spring of 2003 and started working with him.  He had never been on a glove and we had no idea what his flight ability would be,” said Eddie Annal, head bird trainer at the Cincinnati Zoo and Sam’s target on the mound. “The first time he came out of his carrier at the ballpark, he sat on his perch for about 5 minutes probably figuring out how he would get down to me.  Eventually, he glided down to me in center field like a big paper airplane.  He had figured out how to soar down despite his injury.”
Sam’s success story parallels the success of the bald eagle in the United States. In the early 1960s, bald eagles were vanishing from the lower 48 states and on the brink of extinction.  They were removed from the Endangered Species List in 2007 and, a decade after that, there were about 10,000 nests in the lower 48 states, including 221 in Ohio and 164 in Kentucky.