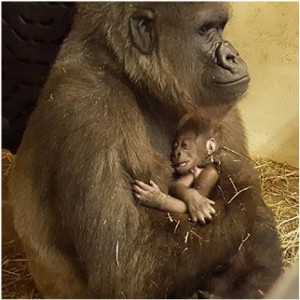 CINCINNATI, OH (August 26, 2015) – It’s a girl! Fourteen-year-old western lowland gorilla Anju (pronounced ah-new)   gave birth Tuesday morning at 7:10 a.m. behind the scenes in Gorilla World.  This is Anju’s first baby and the 50th gorilla born at the Cincinnati Zoo & Botanical Garden since 1970.  Keepers have not yet decided on a name.

“The baby’s father, silverback Jomo, started showing a lot of interest in Anju shortly before she gave birth.  He kept other gorillas, including the very curious, two-year-old Gladys, away from her during labor and delivery,” said Primate Team Leader Eric High, who was there to witness the birth. “Anju was composed and methodically tended to the baby immediately after birth”

“As a first time mom, Anju is still a little awkward with proper positioning of the baby but we think she is slowly getting the hang of it. Gorilla babies are born pretty tough and as long as we see some good nursing bouts, we will be very patient with Anju until she fine tunes her baby skills.  Certainly a lot of responsibility for her and the primate team,” Ron Evans, Curator of Primates at the Cincinnati Zoo.

A 24/7 baby birth watch began two weeks prior to the birth conducted by the Zoo Volunteer Observers (ZVOs) via remote camera. Now that the baby has arrived, the keepers maintain the watch with close proximity observations and will continue until a time that Anju is consistently providing proper care, nursing opportunities and the group has had time to gel after the excitement. The group, including Anju and the baby, will be heading outside soon, but there is no set schedule for when visitors might catch a glimpse.  The Zoo will provide updates, photos and video of the baby via social media using #CZBGBabyGorilla. 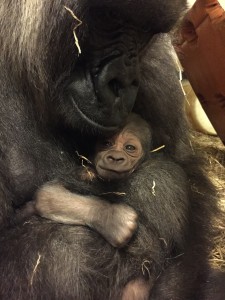 Keepers, with assistance from the imaging team at The Christ Hospital, performed regular ultrasounds throughout Anju’s pregnancy to monitor growth, fetal movement, fluid, and heart rate.  The Zoo is using this information to build its Fetal Great Ape Ultrasound Monitoring Program, a database that will eventually provide the Gorilla Species Survival Program (SSP) with information useful for making breeding recommendations. Anju has been trained to voluntarily receive medical treatments, including sonograms, which allowed her to sit comfortably during the scans.

Anju was born at the Pittsburgh Zoo and came to the Cincinnati Zoo in 2012 on a breeding recommendation from the Association of Zoos & Aquariums (AZA) Gorilla SSP. She is in a social group with Jomo, three adult females, Gladys and one-year-old Mondika. This is Jomo’s third baby, his first being Bakari, a male gorilla born on August 13, 2006, and his second being Mondika, born August 4, 2014.

After the birth of Bakari in 2006, Cincinnati Zoo purposely slowed down its gorilla propagation program to guard against introducing too many related individuals into the national population. Zoos carefully manage and maintain the population in human care in order to avoid taking any gorillas from the wild. Jomo and Anju have significant genetic variation from the rest of the population, making their offspring extremely important to the preservation of their species.