CINCINNATI, OH (July 1, 2020) – It’s fitting that the first king penguin chick to hatch at the Zoo since 2012 arrived in 2020, a year that Cincinnati Zoo & Botanical Garden is calling the “Year of the Penguin.”

“The Zoo’s first birth of the year, in early January, was a little blue penguin, and we’re gearing up to open two new penguin habitats later this summer,” said Cincinnati Zoo director Thane Maynard.  “Since both of the species getting new habitats are warm weather penguins, visitors will be able to see them swimming in Roo Valley and African Penguin Point next month.” 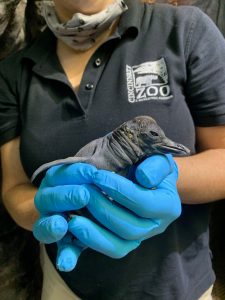 The care team is monitoring the chick, sex not yet known, to make sure it’s being fed by its parents, Larry and Coretta, and is gaining weight.  It weighed 214 grams as of yesterday. If everything proceeds as expected, the chick will remain with the rest of the king penguin colony, including Martin Luther, Burger, Stacey, and Bebe for 3 weeks. After that, he’ll be hand reared in an area with temperature optimized for a chick with fluffy down.  He will return to the colony when he’s full grown and weaned from formula.

King and emperor penguins are known as the “Great Penguins”. Female Kings lay a single egg, and both males and females incubate the eggs on their feet. Incubation lasts 54 days. The parents are only able to produce two chicks every three years. King penguins do not mate for life and usually change partners each breeding season. They have the longest breeding cycle of any bird in the world – it takes them 14 to 16 months to fledge a single chick!  Five king penguins have hatched at the Cincinnati Zoo.