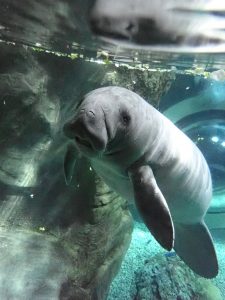 CINCINNATI (August 20, 2019) – The Cincinnati Zoo & Botanical Garden’s female manatee Daphne has gained almost 400 pounds since she arrived at Manatee Springs last April as an orphan in need of rehabilitation and is ready to return to Florida waters. She is the 19th Florida manatee to be rehabilitated at the Cincinnati Zoo in the 20 years that it has participated in the U.S. Fish & Wildlife Service’s Manatee Rescue & Rehabilitation Partnership (MRP).

“Daphne has done really well this past year.  She has reached her target weight and is a candidate for early release since she experienced a winter in Florida waters before she lost her mother,” said Manatee Curator Winton Ray. “Daphne will spend some time at SeaWorld Orlando getting re-acclimated and could be back in her native waters by the end of the year!”

Her companions in Manatee Springs, three male orphans (Matthew, Miles, and Pippen) that came to Cincinnati in October 2017, are on track to be released in Florida next spring.

“Providing homes for non-critical care manatees like Daphne, Pippen, Matthew, and Miles in Cincinnati opens up valuable space at critical care facilities like Sea World Orlando, The Miami Seaquarium, and Zoo Tampa, and gives the Zoo’s 1.8 million annual guests an opportunity to learn about these remarkable animals and the collaborative effort to rescue and rehabilitate them,” said Ray.

Daphne has made a big impression during her short time in Cincinnati!  She is one of ten animals that Zoo Director Thane Maynard selected to include in the “Let Me Tell You a Story” photo and story exhibit that is currently on display at the Zoo.

The Florida manatee, downgraded from endangered to threatened in 2018, is at risk from both natural and man-made causes of injury and mortality. Exposure to red tide, cold stress, and disease are all natural problems that can affect manatees. Human-caused threats include boat strikes, crushing by flood gates or locks, and entanglement in or ingestion of fishing gear. As of 2016, the population was estimated to include 6,000 animals.