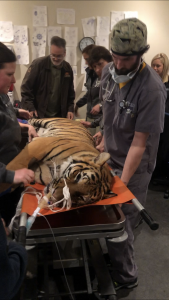 CINCINNATI (July 12, 2019) – Cats are treated at MedVet Cincinnati every day, but the 240-pound tiger that showed up for an appointment last month is the largest feline they’ve seen at the animal hospital on Red Bank Rd. Cincinnati Zoo & Botanical Garden’s two-year-old Malayan tiger Chira has had periodic seizures over the past several months, so the vet team took her there for an MRI so they could get a better look at her head, neck and brain.

“We needed the advanced imaging capabilities that MRI scans produce in order to help rule in or out a physical abnormality in her brain that could be the cause of her seizures,” said Cincinnati Zoo Veterinary Director Mark Campbell, DVM. “MedVet agreed to provide equipment and highly trained personnel to help us achieve this goal.”

This isn’t the first time that MedVet has stepped up to assist the Zoo.  The Animal Health Department has worked with nearly every specialty at MedVet over the years including the cardiology team which has performed routine cardiac ultrasound exams on the Zoo’s African painted dog group, ophthalmologists who have assisted with cases involving elephants, cheetahs, rhinos and snow leopards, and neurology and radiology with Chira and an aardwolf. Of particular note is surgeon Dr. Karl Maritato who has provided his expertise and time in cases involving cheetahs, lions, wallabies, yellow-backed duiker, prehensile-tailed porcupine and most recently the removal a cancerous spleen from one of our pygmy slow lorises.  Cincinnati Children’s (see aardvark MRI story) and The Christ Hospital (see gorilla ultrasound story 1  | story 2) have been equally generous with their time, expertise, and technology. Dentists (see “Say Aaah-rdvark” story), eye doctors, and other specialists occasionally make house calls when the Zoo reaches out.

“We are fortunate to have great resources and medical practitioners in Cincinnati who are willing to consult on special cases or assist with treatment,” said Campbell. “Nurses from Cincinnati Children’s rushed over to place a life-saving IV in our premature baby hippo, Fiona, when she became severely dehydrated.  They have equipment that’s designed to find veins in premature babies.  We don’t have that, or an MRI suite, because the frequency of use on animals at the Zoo wouldn’t justify the expense.”

Chira’s MRI scan showed no obvious physical cause, no tumors or brain lesions, which confirmed that a surgical fix is not an option and that the best way to manage her seizures is with medication.  She is monitored around the clock, on site and via video cameras, and potential hazards have been removed from her environment to avoid injury if she has a seizure.

“Chira has also been separated from her two sisters because their reaction to a seizure is difficult to predict. They could hurt her in the process of trying to help her,” said senior Night Hunters keeper Michelle Kuchle, who has cared for the three tigers since they were born. “Medication reduces but does not eliminate her seizures. We have made visitors aware of her condition and have even asked them to alert staff if they see signs of a seizure.”