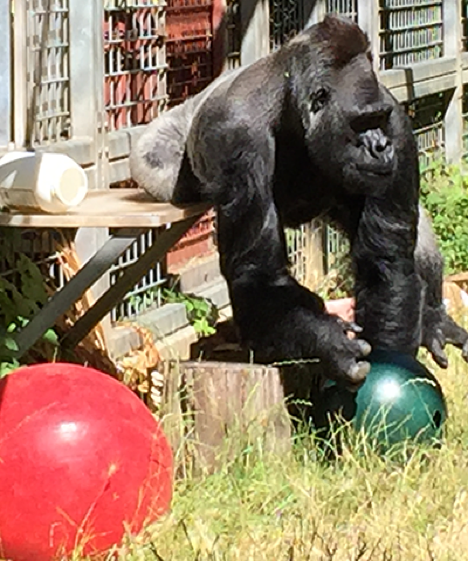 The Cincinnati Zoo & Botanical Garden (CZBG) announced in August that it was ready to welcome silverback gorilla Ndume [nnn-doo-may] back to his original home in Cincinnati based on a recommendation from The Association of Zoos and Aquariums’ (AZA) Gorilla Species Survival Plan® (GSSP). The 37-year-old gorilla was born in Cincinnati and moved to The Gorilla Foundation (TGF) in California in 1991 to be a social companion for female gorilla Koko.  The loan agreement, which was clarified and updated in 2015, stated plainly and unequivocally: “Upon the death of ‘Koko’, ‘Ndume’ will be placed at an AZA institution recommended by the Gorilla Species Survival Plan and the Cincinnati Zoo & Botanical Garden.”

“AZA scientists considered all options available for Ndume and determined that Cincinnati Zoo could provide him with the best home after Koko’s death left him completely isolated from other gorillas.  We have ten gorillas, including relatives of his, who can provide socialization opportunities, qualified vets, dedicated, highly-experienced gorilla caregivers, and an excellent AZA-accredited facility that we recently renovated and expanded,” said Cincinnati Zoo Director Thane Maynard.  “Unfortunately, TGF has now decided not to cooperate with us on the move. We have no choice but to take legal action.”

Plans and a timetable for Ndume’s move were shared with TGF in September.  Since then, TGF has ignored the Zoo’s request for staff to come to California to start conditioning Ndume for transfer, making it impossible to stick to the planned timetable.  In a follow up conversation earlier this week, TGF President Penny Patterson told Thane Maynard that she did not intend to cooperate with the move.

“I have known Ndume since he was two years old and have visited him many times during his time at TGF” said Cincinnati Zoo’s Curator of Primates Ron Evans.  “He is a healthy, normal gorilla and deserves opportunities to be near and cohabitate with other gorillas, a critical foundation need for this highly social species. It’s a shame that the Gorilla Foundation is not honoring that agreement and instead forcing Ndume to live in isolation for months now. He could have already been settling in around the other gorillas and on his way to living in his own family here in Cincinnati. Loaning Ndume to TGF was important for Koko’s health and long life. Ndume should be allowed to return home now that his service to TGF is complete. It’s what’s best for him.”

“Making sure that Ndume is in the best possible social and welfare situation should be everyone’s top priority,” said Dan Ashe, President and CEO of AZA. “We all share responsibility for ensuring the survival of this endangered species, and AZA scientists take the lead in that mission. We’re disappointed that TGF has decided to ignore its contractual commitment to the Cincinnati Zoo and the scientific determination of the AZA and is delaying Ndume’s smooth transfer.”

“The GSSP is comprised of global experts in gorilla husbandry and science.  We are also people who care deeply about gorillas and work daily to ensure the health and well-being of the gorillas in our care.  We recommend Ndume’s immediate move so that he can begin to enjoy the enriched social experience awaiting him at the Cincinnati Zoo,” said Kristen Lukas, Chair of the GSSP.

The Cincinnati Zoo has been caring for gorillas since 1931 and has made significant contributions to gorilla populations in Zoos across the country.  The 50th gorilla born at the Zoo, Elle, lives in a family group with one of the first gorillas born in Cincinnati, 48-year-old Samantha.