CINCINNATI, OH (April 5, 2019) – It was a good year for the North American population of African painted dogs! A little too good at the Endangered Wolf Center (EWC) in St. Louis, MO, where two females gave birth to a total of 23 pups within days of each other in November of 2018.  The new moms were not willing to share the one male or space with the other female’s litter, so one pack is heading to the Cincinnati Zoo & Botanical Garden!

“There is usually one alpha female in a painted dog pack, and that’s the only one that the alpha male will breed,” said Cincinnati Zoo’s Curator of Mammals and Vice Coordinator of the African Painted Dog Species Survival Plan (SSP), Christina Gorsuch.  “The male had a hard time choosing a favorite female in this case, leaving EWC with too many pups to manage in separate spaces.” 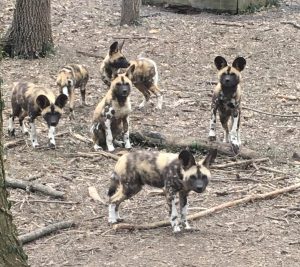 Two large litters of pups, ten in 2015 and twelve in 2016, have been born in Cincinnati Zoo’s Painted Dog Valley, sponsored by US Bank, habitat since it opened in 2014. Its five current residents, from the 2016 litter, are ready to move to other Zoos, as their siblings have, when the SSP makes a transfer recommendation. Until then, to make room for the pups, they will be cared for at one of the Zoo’s off-site properties.

“We’re excited to work with pups again and glad that we could help EWC by providing space and expertise,” said Gorsuch.  “The pack, seven-year-old mom Akili and her ten pups (five males and five females), should be here in a few weeks. At five months old, the pups will physically be on their way from toddlers to awkward pre-teens but still full of energy and mischief. Painted Dog Valley will be the perfect playground for them to learn all the important dog social skills from their mother while still having plenty of time to stalk, chase, and take down their siblings.  Keep your fingers crossed for the trees!”

The Zoo opens daily at 10 a.m. and closes at 5 p.m. (6 p.m. during the summer)  Cincinnati Zoo members and Adventure Ticket holders can enjoy early entry at 9 a.m.  For more information visit cincinnatizoo.org.

African painted dogs, known for their large, round ears and beautiful, multi-colored coats, could once be found all over Africa.  Today they are one of the most endangered carnivores on the continent, with fewer than 5,000 dogs concentrated in parts of southern and eastern Africa.

The Cincinnati Zoo supports the conservation of African painted dogs through the Ruaha Carnivore Project (RCP) and the Botswana Predator Conservation Trust (BPCT). Both protect the endangered species by encouraging human-carnivore coexistence.

« So Much Excitement in the Cincinnati Zoo’s Botanical Garden, You’ll Wet Your Plants!
Randy Houser to Headline Zoo Brew! »