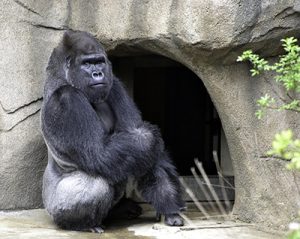 Louisville, Audubon and Cincinnati Zoos work together to save species

CINCINNATI (September 14, 2017) –  Visitors may see a new face at the Cincinnati Zoo & Botanical Garden the next time they stop by Gorilla World.   As part of a multi-zoo collaborative move recommended by the Association of Zoos and Aquariums (AZA) Species Survival Plan (SSP), 29-year-old male gorilla Mshindi [ma-shin-dee] was relocated from the Louisville Zoo to Cincinnati and is starting to make himself at home in the outdoor habitat.

“Mshindi has settled in nicely,” said Ron Evans, Cincinnati Zoo’s Curator of Primates. “We worked closely with Louisville Zoo’s gorilla staff to learn Mshindi’s trained behaviors for body presentations and health exams and to get familiar with his likes and dislikes.  When working with highly intelligent animals like the great apes, it’s imperative for keepers from both zoos involved in a transfer to collaborate and exchange detailed information to ensure a smooth transition.”

Mshindi will explore the outdoor habitat alone at first and will be joined eventually by females Chewie, 21, and Mara, 22, after the three are introduced behind the scenes. The Zoo’s gorilla groups will rotate outside daily until Gorilla World closes on October 3 for final renovations on the new indoor habitat.  If you don’t catch a glimpse of him in the next few weeks, there will be many more viewing opportunities when the Zoo’s new indoor facility opens later this year!

The Gorilla World expansion project has been in the works since 2015 and is on track to be complete later this fall. The final phase includes one of the largest indoor gorilla habitats in the world with naturalistic settings and large spaces that promote healthy interaction and provide nose-to-nose viewing opportunities for gorilla lovers year round. The new facility will help the Zoo continue to inspire gorilla conservation by getting visitors #CloseEnoughToCare.

“When the indoor habitat is ready, we’ll have five distinct areas that connect to allow for fluid movement of the gorilla groups, further enhancing their welfare,” said Evans.  “The spatial variety and flexibility of movement facilitates gorilla choice to be near others or to get some distance from the group as wild gorillas do in the rainforest. It will enhance the social dynamics, improving the overall cohesiveness and wellbeing of the groups.”

The Gorilla SSP, a group that manages the 360+ gorillas in North America and considers genetics, personalities and social needs when deciding where individuals should go, recommended that the Louisville Zoo receive a new silverback, from the Audubon Zoo, to lead Mshindi’s former family group. They chose to move Mshindi to Cincinnati based on the Zoo’s long history and expertise with this critically endangered species.

The Cincinnati Zoo has been caring for gorillas since 1931 and has made significant contributions to gorilla populations in Zoos across the country.  Fifty gorillas have been born in Cincinnati since 1970, when the first two gorillas, Sam and Samantha, were born one week apart. Samantha still resides in Cincinnati.

There are about 765 gorillas in Zoos worldwide. Western lowland gorillas are critically-endangered in the wild, with less than 175,000 individuals. Due primarily to habitat destruction caused by logging, mineral mining and agricultural expansion, wild gorilla numbers continue to shrink.  The bushmeat trade – the killing of wild animals to be used as human food – is also a major threat to the western lowland gorilla population throughout the Central African rainforests.  Over 1,000 gorillas are illegally poached for the bushmeat trade each year. The Cincinnati Zoo supports wild gorilla conservation efforts like the Nouabalé-Ndoki Project in the Republic of Congo.  This project includes the Mbeli Bai Study, the longest running research being done with wild western lowland gorillas.  Through research, local education programs, publications and documentaries, the Mbeli Bai Study and other gorilla related efforts there are raising international awareness for gorillas and their struggle for survival.