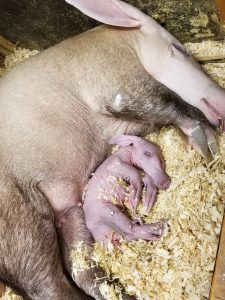 Cincinnati, OH (March 21, 2018)— Cincinnati Zoo & Botanical Garden’s baby aardvark, named Winsol because he was born on the winter solstice, made his public debut this morning on a day that’s more like winter than spring! After three months of bonding with mom behind the scenes, visitors can finally catch a glimpse of the oddly adorable, wrinkly baby and his mom, Ali, in their Night Hunters habitat.

“The aardvark care team closely supervised mom and baby during their first months together to make sure that Winsol was in the right position for nursing and didn’t get stepped on or stuck under mom,” said Mike Dulaney, curator of mammals at the Cincinnati Zoo. “The baby weighs more than 40 pounds now and has added solid foods to his diet, so we can be a little less hands on and allow him to explore his new environment.”

Their habitat, which they share with giant fruit bats and galagos (aka bushbabies), has been babyproofed with extra bedding material.  Winsol will have to learn to navigate the uneven surfaces that he would typically encounter in a natural habitat. 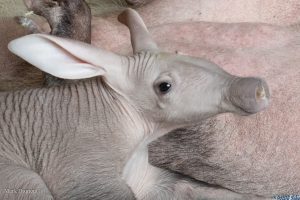 Winsol is the first healthy aardvark baby to be born at the Zoo since 1994.  He weighed about three pounds at birth and will weigh up to 110 pounds when he’s an adult.  Thirteen-year-old Ali weighs 112 pounds.

Because of the close relationship that the care staff has with these animals, the Zoo has been able to collect milk samples from Ali while Winsol nurses.  The samples have been sent to the Smithsonian’s National Zoo Exotic Animal Milk Repository and will be used to create a recipe for synthetic aardvark milk.

Aardvarks are nocturnal mammals native to central and southern Africa. They have powerful claws that they use to rip open rock-hard termite mounds to obtain food and sweep their pig-like snouts from side to side to sniff out insects and lick them up with their long, sticky tongues. With long, donkey-like ears they are able to listen for signs of predators, like lions and leopards, while foraging for their own food.