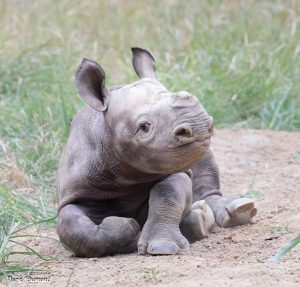 CINCINNATI, OH (October 1, 2020) – Cincinnati Zoo & Botanical Garden’s month-old baby eastern black rhino will be called “Ajani Joe”!  Almost 300 people purchased shower gifts for the baby rhino for the chance to choose his name and an invitation to attend the Rhino Baby Shower, sponsored by Rhino Wipe. Martha Wolf was the winner, and her name choice was announced this morning during the shower.

“My father’s name is Joe and I wanted to honor him but also to choose a name that was of African origin, since that’s the black rhino’s native land,” said Wolf.  “Ajani means ‘he who wins the struggle’.  My dad has been a rock recently as my mom’s primary caretaker, and I hope the little rhino will be strong like him!”

Ajani Joe’s keepers describe him as spunky and curious.  He has been venturing outside and exploring his yard with confidence.  He is not on a set schedule, but visitors may catch a glimpse of him jumping and playing while his protective mom, Seyia, keeps a watchful eye.

“This little guy is an important ambassador for his species.  Eastern black rhinos are critically endangered, and he is the first of his kind born this year in North America. Only eight others, including his brother, were born in the three years prior.”