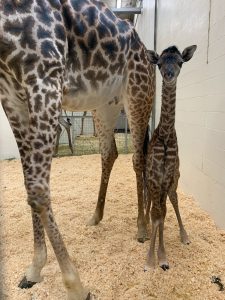 CINCINNATI (June 17, 2019) – 11-year-old Kimba celebrated Father’s Day with a new six-foot-tall bundle of joy that arrived at the Cincinnati Zoo & Botanical Garden early this morning! 12-year-old Tessa delivered the calf at 2:00 a.m. after about one hour of labor. The calf was standing within the hour and was observed nursing throughout the night.

“Tessa is our super mom,” said Christina Gorsuch, curator of mammals at the Cincinnati Zoo. “She and baby are doing well and bonding behind the scenes at Giraffe Ridge. Kimba will be reunited with the full group within a week.”

NOTE: We will make an announcement when visitors can expect to see the new family in their outdoor habitat.

The sex of the baby has not yet been determined. This is the 16th giraffe born at the Cincinnati Zoo since 1889, when the first giraffe calf to be born in any Zoo in the Western Hemisphere arrived.  Baby #17 is expected to arrive this fall!  Eight-year-old Cece is due to have her second calf in November.

After nearly 15 months of gestation, a baby giraffe drops to the ground head first! The fall and the landing do no hurt the calf, but they do cause it to take a big breath. To prepare for the birth, keepers added 6-8 inches of sawdust in Tessa’s indoor bedroom and placed hay on top of large rubber mats to cushion the calf’s fall and to provide excellent footing for the calf once it began to stand. The outside yard was also baby-proofed with canvas.

Tessa came to the Cincinnati Zoo in 2008 from the Houston Zoo on a breeding recommendation from the Association of Zoos and Aquariums’ Species Survival Plan (SSP). Her mate, Kimba, came to Cincinnati in 2008, from the Roger Williams Park Zoo in Providence, Rhode Island.  He has sired six calves, this is his fourth with Tessa.