Friday, January 29, 2010 – Samantha, one of the Cincinnati Zoo & Botanical Garden’s first ever western lowland gorillas born at the Zoo turns 40 this Sunday, January 31. 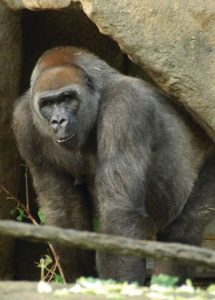 On January 23, 1970, the Cincinnati Zoo witnessed its first live gorilla birth: a male, “Sam,” born to “Mahari” and “Hatari.”  This was followed eight days later by a second gorilla birth, a female, “Samantha,” born to Penelope” and “King Tut.”

Samantha’s mother Penelope never had the advantage of witnessing mother gorillas’ care for their offspring, as she was raised by people.  Subsequently she was a poor mother and the Zoo staff had to step in.  However, the Zoo had no real experience raising baby gorillas at that time so they requested help from Good Samaritan Hospital.  The babies remained at the Hospital, in a special area away from the human babies, for several weeks before being brought back to the Zoo. Once back at the Zoo the volunteer nursing staff continued to be involved and helped the Zoo staff in caring for them. As a result of their stay at ‘Good Sam’ and the great care provided by the volunteer nursing staff, the babies were named Sam and Samantha.

“It was quite astonishing to me to witness the birth of Samantha in 1970 and to become, at that time, one of only a handful of people in the world to have seen a gorilla birth,” said Mike Dulaney, Cincinnati Zoo Curator of Mammals.  “Little did I know that as time passed I would see her children and even her grandchildren come into the world.  I was fortunate to be a gorilla keeper for several years in the 1980s and 90s and got to take care of not only Samantha but her parents and some of her kids as well. I still have a special place in my heart for Samantha and visit with her often on my daily rounds.”

Today, Samantha is a veteran mother of seven and grandmother of 11, and is considered a “supermom” by the Zoo’s Animal Care Staff that know her the best.  Cincinnati Zoo gorillas have been some of the most prolific gorillas in zoos, making the Zoo one of the top breeders of this endangered species in the world with 49 births to date.

“Samantha has played many important roles during her 40 years at the zoo,” said Ron Evans, Cincinnati Zoo Primate Team Leader.   “Cincinnati celebrity as a baby; Supermom later with her own offspring; Teacher as she modeled ideal maternal care for other young gorilla mothers including her own daughters; and matriarch as a well established leader.”

“I would have to say that when you add it all up Samantha is probably the single most valuable individual gorilla we have ever had in Cincinnati,” added Evans.  “She is certainly one of my favorites. So much so that I named my daughter after her.”

Western lowland gorillas are critically endangered in the wild, with less than 175,000 individuals. Due primarily to habitat destruction caused by logging, mineral mining and agricultural expansion, wild gorilla numbers continue to shrink.  The bushmeat trade – the killing of wild animals to be used as human food – is also a major threat to the western lowland gorilla population throughout the Central African rainforests.  Over 1,000 gorillas are illegally poached for the bushmeat trade each year. The Cincinnati Zoo supports wild gorilla conservation efforts like the Mbeli Bai Study.  The Mbeli Bai Study is the longest running research being done with wild western lowland gorillas.  Through research, local education programs, publications and documentaries, the Mbeli Bai Study is raising international awareness for gorillas and their struggle for survival. For more information, visit www.cincinnatizoo.org.

So, what you do get a 40-year-old gorilla for her birthday? Answer:  A Cell Phone!

Recycling your old cell phone will reduce mining for coltan, an ore used in cell phones, in gorilla habitat and raise money for the Zoo’s Conservation Fund. Cell phone collection boxes are located at the Zoo’s main ticketing office and at the Gorilla World exhibit.