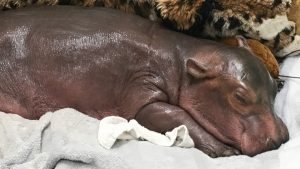 “Even though Fiona’s not out of the woods yet, every baby needs a name and her animal care team thought the name was a perfect fit for their “fair” little girl,” said Christina Gorsuch, curator of mammals at the Cincinnati Zoo. “They have been with her 24 hours a day and think this name suits her personality.”

The calf arrived six weeks earlier than her expected March due date and has been receiving critical care from Zoo staff since vets determined that she was too weak to stand to nurse from mom, seventeen-year-old Bibi. She is being cared for in close proximity to mom and dad, Henry, so they can hear and smell each other.

“She still has a long way to go before she’ll be strong enough to be reunited with her mom,” said Gorsuch.  “She needs to learn how to nurse on her own, walk, swim and get a lot bigger.”