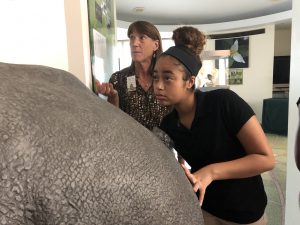 CINCINNATI, OH (November 1, 2019) – The normal gestation period for a black rhino is 15 months, but budding scientists that volunteer to perform an ultrasound on “Charlotte” will experience the thrill of seeing and hearing a fetal heartbeat for as long as the life-size rhino replica stands at the Cincinnati Zoo & Botanical Garden’s Center for Conservation and Research of Endangered Wildlife’s (CREW).

“We’re thrilled to be able to demonstrate what a reproductive physiologist does and spark interest in science and conservation research,” said CREW Director Dr. Terri Roth. “Charlotte offers kids and adults alike the opportunity to experience being a CREW rhino scientist…safely.”

Charlotte, made primarily out of fiberglass and created by American Visionary, stands calmly while volunteers and educators teach program participants how rhinos are being trained by animal care staff at zoos across North America to stand voluntarily for rectal ultrasound exams, how ultrasound technology works, and why the information from these exams is so critical to CREW’s rhino reproductive research.

“Student volunteers get to put on a plastic sleeve and actually perform a rectal ultrasound exam on Charlotte,” said Roth.  “The ultimate goal of this groundbreaking “immersion” experience, the first of its kind, is to locate the rhino fetus with beating heart, and our program leaders make sure that no participant leaves disappointed.”

Students from the Zoo’s on-site high school, the Zoo Academy, were among the first to learn from Charlotte.  “Probably one of the coolest things I’ve done so far at the Zoo Academy is come and be with Terri and Charlotte. I do want to be a vet, so this is the kind of work I could be doing in the future,” said Zoo Academy Junior Kamryn Poole.

This is not the first time that CREW scientists have been first!  Dr. Roth is credited with figuring out how to successfully breed Sumatran rhinos, one of the most endangered rhino species.  Her research led to the births of three calves at the Cincinnati Zoo, and one of those has sired two calves with a female at the Sumatran Rhino Sanctuary.  There are fewer than 80 in the world.

Reproductive physiologists from CREW work with the Zoo’s animal care staff to perform “awake” ultrasounds on a variety of animals, including a polar bear.  They were the first to see an image of the now famous “Fiona”, the hippo that was born six-weeks premature and was nursed to health by Zoo vets and her caregivers.  Today she weighs 1,200 pounds and is an ambassador for her species.

In addition to inspiring future scientists, Charlotte is an ambassador for her species. Eastern black rhinos, native to Eastern and Central Africa, are critically endangered due to poaching and habitat loss.  Fewer than 5,000 black rhinos remain in the world.

The hands-on experience is currently only available to student groups and private tours, but the Zoo plans to make it open to the public next year.

This one-of-a-kind interactive exhibit was made possible by a generous donation from the Hilton Family in honor of Elisabeth and Reagan Hilton.