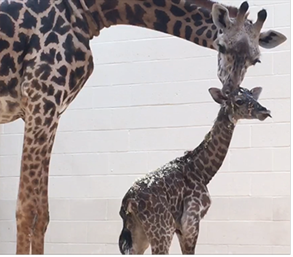 CINCINNATI, OH (July 27, 2016) – It may sound like a tall tale, but the giraffe born this morning at the Cincinnati Zoo & Botanical Garden weighs approximately 100 pounds and towers over most of its keepers!  After an unusually quick labor, five-year-old giraffe Cece delivered a healthy calf at 10:27 a.m. in her indoor stall.  The calf stood within an hour of birth.

“Cece gave us a good indication that something was happening when she refused to leave her stall to go outside this morning. Labor started at 9:57 a.m., hooves out at 10, head at 10:22 and birth at 10:27!  The birth process can take up to six hours, so 30 minutes is incredibly fast, especially for a first time mom,” said Christina Gorsuch, curator of mammals at the Cincinnati Zoo.

Cece and the calf will spend a few days bonding inside Giraffe Ridge and then head out on exhibit with the Zoo’s other female giraffes, Tessa and Jambo. The male giraffe, Kimba, will be outside in the new bull yard, made possible by visitor donations, at first but will be reunited with the full group in a week or two.

“The baby looks great,” said Cincinnati Zoo Director Thane Maynard.  “We’re very pleased with the way first-time-mom Cece handled labor and delivery.  Her maternal instincts kicked in as they should, and we’re hoping that Jambo was paying attention.  She’s expecting and due in about a month!”

The Cincinnati Zoo’s history with giraffe births dates back to 1889 when it became the first zoo in the Western Hemisphere to produce a baby giraffe.  This is the fourteenth giraffe born in Cincinnati.

After nearly 15 months of gestation, a baby giraffe drops to the ground head first! The fall and the landing do no hurt the calf, but they do cause it to take a big breath.  To prepare for the birth, keepers added 6-8 inches of sawdust in Cece’s indoor stall and placed hay on top of large rubber mats to cushion the calf’s fall and to provide excellent footing for the calf once it began to stand.  The outside yard was also baby-proofed with canvas.

Cece came to the Cincinnati Zoo in 2013 from the Kansas City Zoo on a breeding recommendation from the Association of Zoos and Aquariums’ Species Survival Plan (SSP). Her mate, Kimba, came to Cincinnati in 2008, from the Roger Williams Park Zoo in Providence, Rhode Island.  He has sired three calves with Tessa and Jambo’s calf will make him a five-time dad.

Although their numbers have decreased in the past century, giraffes are not currently endangered, but listed as “lower risk” with fairly stable populations. Unlike many species, there is no true breeding season for the Maasai giraffe and females can become pregnant beginning at just four years of age.  In the wild up to 75% of the calves die in their first few months of life, mainly due to predation.

« The Weight is Over at the Cincinnati Zoo! Hippo Cove is now open to the public!
P&G, Reds & Zoo Community Makeover »