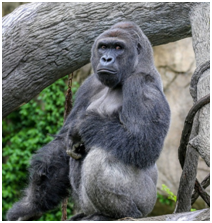 CINCINNATI  (June 1, 2016) – Since the tragic death of Harambe last Saturday, thousands of people have asked how they can help gorillas in the wild.  As a result, the Cincinnati Zoo is redoubling its efforts to support gorilla conservation and encouraging others to join us.

For the past 15 years, the Cincinnati Zoo has played a key role in West Africa.  The Zoo supports wild gorilla conservation efforts like the Mbeli Bai Study in Nouabalé-Ndoki National Park in the Republic of Congo.

If you are interested in supporting gorilla conservation in honor of Harambe, you can donate to the Mbeli Bai Study. It is the longest-running field study of western lowland gorillas in the wild. Observations have provided unique insights into the gorilla’s social organization and dynamics.

The Zoo is home to ten western lowland gorillas. There are about 765 gorillas in zoos worldwide including approximately 360 in the Association of Zoos & Aquariums (AZA) Species Survival Program (SSP) for this species. Western lowland gorillas are critically-endangered in the wild, with less than 175,000 individuals. Due primarily to habitat destruction caused by logging, mineral mining and agricultural expansion, wild gorilla numbers continue to shrink. More about how Cincinnati Zoo supports gorilla conservation.

Other ways to help include collecting cells phones to recycle or ADOPTing a gorilla.