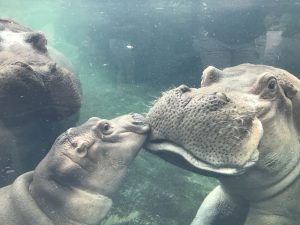 CINCINNATI, OH (October 20, 2017) –Cincinnati Zoo & Botanical Garden’s much-beloved hippo Henry has been struggling with health issues for weeks. An exam last week revealed an infection and abnormal kidney function that vets feared would be untreatable.  Today’s exam, however, indicated that antibiotics and treatment seem to be working. The 36-year-old father of the famous Fiona appears to be on the mend!

“We’re thrilled to see improvement, but Henry is not out of the woods.  His bloodwork looks good, kidney numbers are in the normal range, but his appetite has to kick back in,” said Christina Gorsuch, Cincinnati Zoo’s Curator of Mammals.  “The Africa staff will continue to support him and do their best to get him back to his old self. Let’s hope that Fiona got her fight from Henry and that he’ll use his reserves to get better.” 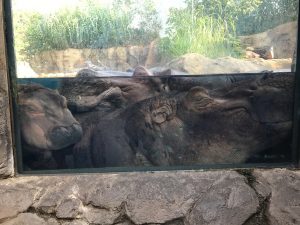 Henry will remain inside for the short term so vets and caregivers can treat him.  Fiona and Bibi will be in the outside pool but will have access to visit with Henry inside.  Weather is also a factor this time of year.  Temperatures need to be 50 or above in order for the hippos to go out.

“Everyone has been worried about Henry.  The support, once again, from our community and beyond, has been incredible,” said Thane Maynard, Director of the Cincinnati Zoo.  “Your positive thoughts and prayers made a difference!  Please keep them coming.”

Henry, from Dickerson Park Zoo, and Bibi, from St. Louis Zoo, were the first residents of the Zoo’s Hippo Cove, arriving early last summer on a breeding recommendation from the Association of Zoos and Aquariums (AZA) Species Survival Plan (SSP).

The Nile hippopotamus population is considered vulnerable. Numbers have declined by 7 to 20 percent over the past 10 years and likely will continue to decline. There are estimated to be between 125,000 and 148,000 remaining in the wild.  Primary threats are poaching (for their ivory tusks and meat) and loss of habitat as more water is diverted for agriculture.