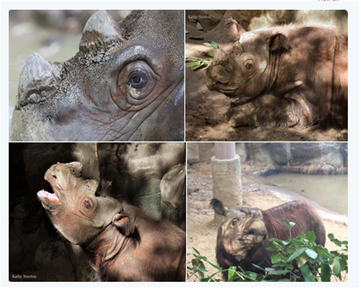 CINCINNATI (October 22, 2015) – One week from today, October 29, will be Sumatran rhino Harapan’s last day on exhibit at the Cincinnati Zoo & Botanical Garden and the last chance that most people will ever have to see this rhino species other than in a photograph.  After that, he’ll remain behind the scenes until it’s time to embark on his long journey to the island of Sumatra.

In preparation for the move, 1,800-pound Harapan has had physical exams and has been trained to walk in and out of a specially-constructed travel crate. “He is comfortable in his crate and voluntarily spends time standing in it.  There’s a stable door on one end that we can open in transit for feeding and doing medical checks,” said keeper Paul Reinhart, who will accompany Harapan on the trip along with Zoo veterinarian Dr. Jenny Nollman.

“No one wants to see Harry go.  Many of us witnessed his birth here eight years ago and cared for his parents and siblings. We’re attached, to say the least.  We also know that giving him the opportunity to breed in Sumatra is the right thing to do for the species,” said Dr. Terri Roth, Director of the Zoo’s Center for Conservation & Research of Endangered Wildlife (CREW).  His departure marks the end of an era for the Cincinnati Zoo’s Sumatran rhino breeding program, the only breeding program in zoos outside of Indonesia to produce calves for this critically-endangered species.

Harapan has reached sexual maturity and his opportunity to breed and contribute to his species’ survival exists only at the Sumatran Rhino Sanctuary (SRS), a breeding facility in the Way Kambas National Park of Indonesia.  SRS is home to Harapan’s brother Andalas, as well as the son that Andalas sired at the sanctuary in 2012, and three possible mates for Harapan.  Recent news that Andalas’ mate is expecting and due in May provides more than a ray of  #HopeForHarry (the hashtag being used for Harapan updates).

Approximately 100 of Harapan’s kind remain in the world and only nine are cared for in zoos. Also known as the “hairy rhino” because of its hairy body, the remaining wild Sumatran rhinos are scattered throughout fragmented rainforests in Southeast Asia, making it difficult for the animals to find each other and reproduce.  Scientists have declared the species extinct in the wild in Malaysia, dealing another blow to a species that’s already considered the most endangered rhino.

Harapan is the only Sumatran rhino on view to the public anywhere in the world. Zoo visitors can find him in Wildlife Canyon from 11 a.m. – 2 p.m., weather permitting, through October 29.

After years of research, CREW scientists at the Cincinnati Zoo, led by Dr. Roth, unraveled the mysteries of Sumatran rhino reproduction and, in 2001, produced Andalas, the first calf bred and born in zoosin 112 years. In 2004, his sister, Suci, was born, and in 2007, Harapan arrived.  Between 2001 and 2012, the Cincinnati Zoo held the distinction as the only place successfully breeding this endangered species.  The Zoo worked closely with Indonesian and Malaysian colleagues to transfer knowledge and techniques so that they too could succeed.  In 2007, the Cincinnati and Los Angeles Zoos agreed to send Andalas to the SRS to replace an old, infertile bull.  That sacrifice on the part of the LA Zoo, where Andalas was living at the time of his transfer, paid off in spades in 2012 when Andalas’s healthy son was born in Sumatra.

« Cincinnati Zoo’s Hippo Exhibit is On Track to Make a Big Splash in 2016!
New Manatee in Tank at Manatee Springs »