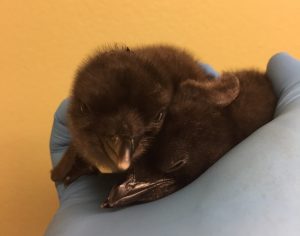 Two chicks have hatched and two more are expected to pip soon!

CINCINNATI (January 3, 2019) – The Cincinnati Zoo & Botanical Garden is officially a chick magnet with the recent arrival of two little blue penguin chicks and the hope that two more will hatch soon!  It is home to the largest colony of the smallest penguin species, due in large part to the husbandry expertise of the Zoo’s bird staff.

“We have more than 30 birds in the colony,” said Cincinnati Zoo senior aviculturist Cody Sowers. “Some of the more experienced pairs do fine sitting on their eggs and caring for young chicks, but the eggs that we ended up incubating were from first-time pairs that didn’t seem sure about what to do!  That’s where we come in.”

The chicks, born 12/28/18 and 12/31/18, will be reintroduced to the colony when they are about six weeks old and are eating what the adults eat.  They are currently being fed a mix of herring, krill and Pedialyte five times a day by the bird team.  Both are eating well, and one has already opened its eyes.  The Zoo will be asking for name suggestions on its Facebook page starting tomorrow.

The Cincinnati Zoo recently broke ground on Roo Valley, one of the first projects that will be funded by its More Home to Roam capital campaign, which will include a new and improved home for the growing little blue penguin colony.  In the new habitat, expected to open in the spring of 2020, visitors will get a close, underwater view of the charismatic penguins swimming!