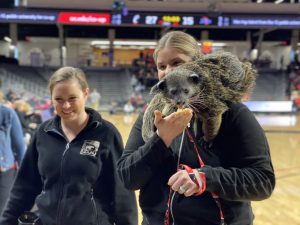 Lucille the bearcat ambassador-in-training attended her first University of Cincinnati basketball game earlier today and helped the UC women’s team defeat the Tulsa Golden Hurricane!  She is now 1-0 (bearcats are 16-7).

The five-month-old bearcat has been preparing for her role as an ambassador for her species, both at the Zoo and at UC, for the last four months.  Many steps are required to prepare an animal to be an ambassador, and one of the most important is bonding with the care team. Because the care team knows her so well, they can assess a positive response to new stimuli. They constantly monitor her behavior and methodically add new stimuli after they are sure that she is okay with everything else in her surroundings. Certain behaviors, like eating, demonstrate that Lucille is comfortable.  Her care team looks for these signs.  Lucille lets them know when she is finished, and she always has the option to go into her crate.  She did great today and even made an appearance on the court!

Many UC students don’t know what a bearcat is, even though that is the university’s mascot, and most have never seen one!  Taking Lucille to campus gives them an opportunity to learn about her species, bearcat aka binturong, and get close enough to care!! Today’s game was attended by about 2,000 school children, many of whom got to meet and learn about Lucille as they walked in.

According to care team leader Sarah Swanson, “Lucille was amazing today.  Every step of the way she has surprised us with her curiosity, resilience, and comfort with all the activity, sounds, and smells.  Her care team is so proud of her and all the hard work that has gone into acclimating Lucille.  She is definitely making UC her home away from home and we cannot be more excited for her future.”

Lucille will begin appearing at select men’s and women’s basketball games for the rest of the season.  Next will be baseball season and eventually football.