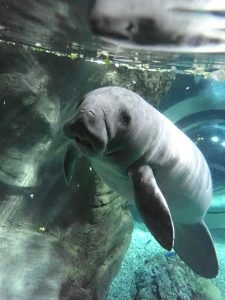 CINCINNATI (October 23, 2020) – Female manatee Daphne was released into her native Florida waters earlier this week. After being rescued by SeaWorld Orlando as an orphan in 2018 and spending a year rehabilitating at the Cincinnati Zoo & Botanical Garden, another U.S. Fish & Wildlife Service’s Manatee Rescue & Rehabilitation Partnership (MRP) participant is back in the habitat where she was born.

“The goal of the MRP program is to rescue, rehabilitate, and release manatees,” said manatee curator Winton Ray. “Daphne is the 17thmanatee to be released after being rehabbed in Cincinnati. Her release was extra special for manatee team member April Smith, who was able to be there to see Daphne swim away.”

Cincinnati Zoo is one of two facilities outside of Florida that provides non-critical care for manatees.  It has rehabilitated 20 injured or orphaned manatees in the 20 years that it has been a member of the MRP.

“Caring for manatees like Daphne and other recent residents of Manatee Springs – Truffleshuffle, Pippen, Matthew, and Miles – opens up valuable space at critical care facilities like Sea World Orlando and gives the Zoo’s guests an opportunity to learn about these remarkable animals and the collaborative effort to rescue and rehabilitate them,” said Ray

Prior to release, the manatees are fitted with a tracker.  You can track some of its former residents, including Daphne, on the MRP’s website.

Daphne made a big impression during her short time in Cincinnati!  She is one of ten animals that Zoo Director Thane Maynard selected to include in the “Let Me Tell You a Story” photo and story exhibit that was displayed at the Zoo last fall.

The manatee pool in Manatee Springs is getting some TLC this winter but will be ready to welcome manatees back in the spring of 2021.

A big thank you to Chick-fil-A for supporting the Cincinnati Zoo’s efforts to save manatees.