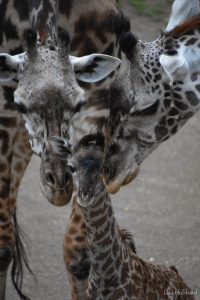 CINCINNATI (June 21, 2019) – The Cincinnati Zoo & Botanical Garden celebrates World Giraffe Day by introducing its four-day-old giraffe to the world! The 147-pound male calf has been named “Fennessy,” by his care team after giraffe conservationist and founder of World Giraffe Day, Julian Fennessy. The Zoo made the official announcement this morning Live on Facebook during Fennessy’s official media debut in the outside yard at Giraffe Ridge.

Fennessy was born on June 17, 2019 to parents Tessa and Kimba. 12-year-old Tessa delivered the calf at 2:00 a.m. after about one hour of labor. He was standing within the hour and was observed nursing throughout the night. Fennessy has since been bonding behind the scenes with mom and other female giraffes, Cece, who is expecting a calf in November, and Zoey. Kimba will be reunited with the full group within a week.

“We thought World Giraffe Day was the perfect day to announce the calf’s name and sex,” said Christina Gorsuch, curator of mammals at the Cincinnati Zoo. “Fennessy is spunky and has been exploring with his protective super mom Tessa always nearby.”

This is the 16th giraffe born at the Cincinnati Zoo since 1889, and Tessa’s fourth. Baby #17 is expected to arrive this fall!  Eight-year-old Cece is due to have her second calf in November. 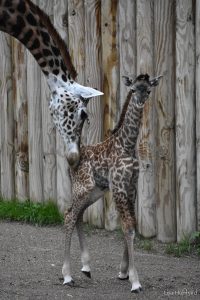 World Giraffe Day is an annual event that celebrates the longest-necked animal on the longest day of the year! Giraffe have been going through a silent crisis in the past few years in that their numbers in the wild have dropped dramatically with little notice. In 2018, giraffes were listed as Vulnerable on the IUCN Red List. Their numbers have decreased by about 40% and there are less than 100,000 giraffes left throughout Africa. Giraffe populations are suffering from habitat loss, habitat degradation, habitat fragmentation, population growth and poaching. Association of Zoos and Aquariums (AZA) accredited zoos and their partners are working collectively to help save giraffe through education, scientific research, field work, public awareness and action. The Cincinnati Zoo supports wild Maasai giraffe conservation by offering “behind the scenes” tours with proceeds going to the Wild Nature Institute. Visit cincinnatizoo.org to schedule a tour.