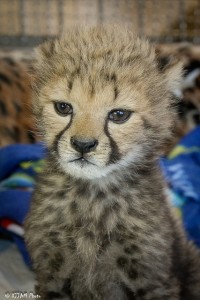 CINCINNATI, OH (April 5, 2016) – A lone cheetah cub in search of litter mates has found a new home at the Cincinnati Zoo & Botanical Garden. The male cub, born 12 days before Cincinnati Zoo’s cubs were delivered via C-section (on March 8), was not able to be cared for by his mother at Wildlife Safari in Winston, OR.

Wildlife Safari and the Cincinnati Zoo, both members of the cheetah Breeding Center Coalition (BCC), agreed that it would be beneficial for the single cub to join the four cubs being cared for in the Zoo’s Nursery.  “Socialization and companionship, ideally with other cheetahs, is important at this age.  Between Blakely (the nursery dog/nanny) and the other cubs, this guy will get plenty of attention and exercise,” said Christina Gorsuch, Curator of Mammals at the Cincinnati Zoo.
Since the four premature cubs in the Nursery are still receiving critical care, it will be a week or two before they’re introduced to the bigger cub.  “He’s stronger and much larger than the other cubs.  We will supervise initial visits and ease him into the mix,” said Gorsuch.
All of the cubs will eventually become ambassadors for their species. Two males will move to another Zoo and the others will remain in Cincinnati. “We’re excited to raise the next generation of sprinters!” said Linda Castaneda, Lead Trainer for the Cincinnati Zoo’s Cat Ambassador Program. Castaneda worked closely with Sarah, who was famous for being the fastest cheetah in the world! “We’re not really concerned with breaking speed records at this point.  We just want the cubs to grow and stay strong.”
Nursery and vet staff are doing everything they can to help the cubs gain weight and make it past the critical one-month milestone. They will remain in the Nursery for four to six more weeks.   Visitors may be able to view the cubs through the Nursery windows, but some feedings and exams will take place behind the scenes.
Since 1980 the Cincinnati Zoo’s Cat Ambassador Program has taken African cheetahs to schools and programs around the U.S, Canada, and Central America to spread the word that cheetahs are running for their lives.  In addition, each summer the Zoo takes 44 educators to the Cheetah Conservation Fund’s headquarters in Namibia for a two-week conservation field study. Since 1990 the Cincinnati Zoo’s Angel Fund, named after our first cheetah ambassador, “Angel,” has directly supported cheetah conservation in Africa.  From South Africa and Namibia in the south, up through Kenya and Tanzania in East Africa, The Angel Fund has contributed more than $1 million in support for cheetahs in the wild.
The Cincinnati Zoo is one of nine institutions accredited by the Association of Zoos and Aquariums (AZA) that participate in the BBC. Working closely with the AZA’s Cheetah Species Survival Plan (SSP), the BCC’s goal is to create a sustainable cheetah population that will prevent extinction of the world’s fastest land animal.
Cheetahs are endangered, and their population worldwide has shrunk from about 100,000 in 1900 to an estimated 9,000 to 12,000 cheetahs today.