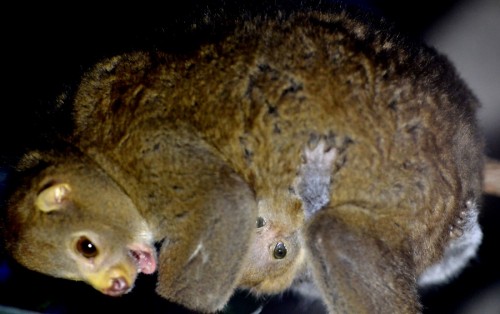 Cincinnati, OH (February 17, 2016)— If you are patient and let your eyes adjust, you may see 2-month-old “Otto” the potto the next time you visit Cincinnati Zoo & Botanical Garden’s Night Hunters exhibit.  Only five U.S. Zoos exhibit pottos, and seven of the 16 in zoos live at the Cincinnati Zoo.

Video of Mosi and Otto

“The baby has been hard to spot.  It was about the size of a human thumb when it was born and also the same color as the mom’s chest, which is where Otto can be found most of the time,” said Mike Dulaney, Curator of Mammals.  “Most potto moms park (a term used to describe leaving infants on a branch) their young in order to go off and feed on their own, but Mosi has been reluctant to leave her baby.” 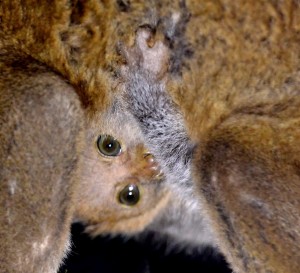 The baby, large for its age, is starting to change color and will soon shift to a piggyback position.  This should make it easier for visitors to see the new addition to Night Hunters.

Primates are generally categorized into three groupings—monkeys, apes, and prosimians. Typically thought to be more primitive than other primates, prosimians tend to be small and nocturnal. The big-eyed potto certainly fits the bill. Unlike other animals, pottos don’t make a nest when the baby is born – the baby clings to the mom and blends in with her belly.