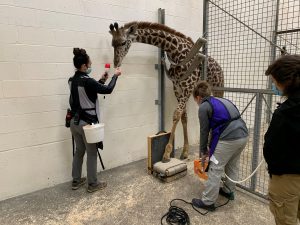 CINCINNATI (February 12, 2021) – Hundreds of hours and thousands of crackers went into teaching Cincinnati Zoo & Botanical Garden’s giraffes to participate in their own hoof care. Giraffes are known to be nervous and skittish, so getting one to offer a foot and stand still while it’s being touched and handled by a keeper is no small accomplishment.

“The hoof trimming procedure doesn’t hurt, but it’s not exactly a pampering experience like a human pedicure!  The fact that our giraffe team, led by Teresa Truesdale, has been able to teach all five of our giraffes, including two young males, to allow their feet to be handled is truly remarkable,” said Cincinnati Zoo director Thane Maynard.  “Foot health is vitally important for a species that has to balance a lot of weight on extra-long legs. The ability to perform maintenance with the animal’s cooperation allows the team to do regular checkups without the risks associated with anesthesia.”

Several small behaviors, each taking weeks to learn, had to be taught before the foot was ever touched. The first step was to get the giraffe to recognize a “target” and touch it with its nose.  That behavior gets reinforced until it is learned.  Then other behaviors, like lifting a foot, getting used to seeing a block in the barn, placing a foot on the block, and curling the foot under, are added and repeated.

“Our goal is to make sure that the giraffes are comfortable and active,” said Cincinnati Zoo’s primary giraffe trainer Teresa Truesdale.  “Hoof overgrowth can lead to broken bones, torn ligaments, and general pain that ultimately discourages movement.”

In 2019, the Zoo brought in world-renowned farrier Steve Foxworth. An expert in hoof care for large and small ungulates, Foxworth shared best practices with the giraffe keepers, vet staff and other teams that work with hooved mammals. The collaboration with Foxworth is ongoing, with zookeepers attending his workshops and reaching out to him for support and guidance.