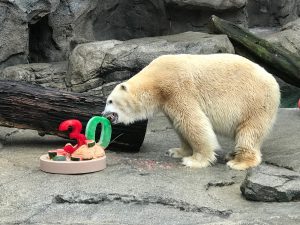 “Little One is the second oldest male polar bear in the U.S. Zoo population.  He’s been with us for a long time, and we wanted to make his 30th special,” said Head Keeper of Bears, Lisa Vollmer. “The cake, which was made of a combination of Little One’s favorite food items, was a big hit.”

Little One’s mate, Anana, has been denning since November 1 and is still within the birthing window for the season.  The best birthday gift possible would be for a polar bear cub to be born today!  In addition to it being Little One’s 30th, this week is the 30th anniversary of the last time a polar bear was born at the Cincinnati Zoo.

This may also be his last chance to reproduce. Despite being matched with several females over the years, he has never sired offspring.  He’s been with Anana for three breeding seasons.  Since she is one of only six females in U.S. Zoos that have produced cubs in the last decade, the Association of Zoos and Aquariums (AZA)’s polar bear Species Survival Plan (SSP) has recommended that she be transferred to another zoo and new mate if she does not give birth this year.

“Little One is the most genetically valuable male in the U.S. Zoo population, and we remain hopeful that those genes will be passed along,” said Vollmer.  “If that does not happen with Anana, it’s important for her to be put in the best possible breeding situation.”

The median life expectancy for a male polar bear is 21. Little One’s longevity can be attributed to the excellent care he receives.  His care team provides daily enrichment, a nutritious diet specifically designed for a geriatric bear, and a comfortable environment inside and out.

Polar bears are one of four Signature Projects at the Zoo’s Center for Conservation and Research of Endangered Wildlife (CREW). Its scientists have studied 63 polar bears at 30 North American institutions since 2007 to better understand female cyclicity, male reproductive seasonality, and the long-term effects of contraceptives. They have established methodologies for semen collection and cryopreservation and performed the world’s first polar bear artificial insemination (AI) in 2012. Wild polar bears live in remote and harsh conditions, which makes them difficult to study. By monitoring zoo bears, scientists can learn more about the unique physiology and behavior of this species, information that can then be applied to wild polar bear conservation efforts.