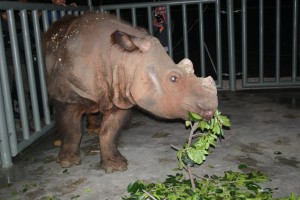 CINCINNATI (November 2, 2015) – The rhino formerly known as the last Sumatran rhino in the Western Hemisphere has joined the rest of his kind across the world in Indonesia.  After a 53-hour journey from the Cincinnati Zoo & Botanical Garden to the the Sumatran Rhino Sanctuary (SRS), “Harapan – aka Harry” emerged from his travel crate ready to snack and walk around!

Accompanied by keeper Paul Reinhart and Zoo veterinarian Dr. Jenny Nollman, the 1,800-pound rhino departed from Cincinnati on Friday afternoon, October 30, making stops in Columbus, OH, Chicago, IL, Anchorage, AK, Hong Kong and Jakarta before being trucked and ferried to his final destination in Sumatra on November 1. The team provided short updates along the way, such as this one from Reinhart, “He was cool and calm to anchorage. Somewhat agitated on and off to here. Once we landed, he’s great. Laying down again. Calm.”

Cincinnati Zoo videographer Pat Story is documenting Harry’s historic journey and captured the moment when Harry backed out of his crate.

Breathing a big sigh of relief, Dr. Terri Roth, Director of the Zoo’s Center for Conservation & Research of Endangered Wildlife (CREW), shared that “All is well at the SRS, and boy is Harapan glad to be out of that crate!  We were all shocked at how well he rebounded the minute he was out.  We thought he would wobble a bit, but he came out looking his perky self and immediately started eating the local browse that was waiting for him.”  Dr. Roth met Harry’s plane in Jakarta and traveled with him on the final leg of the journey to SRS.

After completing a mandatory two-week stay in quarantine, 8-year-old Harry will have access to the forested areas at the sanctuary and will embark on his mission to mate to help save his critically-endangered species from extinction. The hope is that Harry will sire a calf with one of the three females at SRS. His brother Andalas, born at the Cincinnati Zoo in 2001 and now living at SRS, has sired one calf with 12-year-old Ratu.  She is now pregnant with a second calf and is expected to give birth in May.

There are fewer than 100 Sumatran rhinos left in the world.  The Cincinnati Zoo’s Sumatran rhino breeding program produced three calves, including Harry, between 2001 and 2007, due to groundbreaking reproductive research by Dr. Roth.