CINCINNATI (January 11, 2013) – “Woodstock,” a young, female manatee has safely arrived at the Cincinnati Zoo & Botanical Garden and is exploring her new home in the Zoo’s Otto M. Budig Family Foundation Manatee  Springs exhibit.  The 900-pound, two-year-old manatee arrived from the Columbus Zoo this afternoon and is doing well. 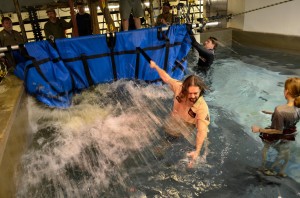 Woodstock was born in the wild and rescued off the Southwest coast of Florida on January 7, 2011.  She and her mother were victims of cold-stress. Woodstock was orphaned when her mother did not survive. Woodstock spent time at the Miami Seaquarium prior to going to the Columbus Zoo on November 2, 2011 and she is coming to Cincinnati to provide companionship for the Zoo’s current, lone female manatee, “Betsy.”

Betsy has been alone since her previous companion, “Wooten,” left in November 2012 to be released back into the wild.

According to the USFWS, “a period of prolonged cold weather in Florida exposes manatees to colder than normal water temperatures. Exposure to low temperatures over a period of time can cause a condition called “manatee cold-stress syndrome,” which can result in death.” Due to this condition, manatees like Woodstock, have been rescued and are recovering at partner zoos and organizations throughout the country.

Today, Woodstock traveled by truck down the long stretch of Interstate 71 South, to her new home in Cincinnati.  She was escorted by Cincinnati Zoo Director of Animal Health, Dr. Mark Campbell, Head Manatee Keeper Jamey Vogel, and Curator of Mammals, Mike Dulaney.  Staff worked to monitor Woodstock during the trip and ensured her safe and calm arrival.  Both Woodstock and Betsy are already on display in Manatee Springs.

“Without a doubt, manatees are one of the most charismatic creatures and certainly one of the Zoo’s most popular animals,” said Thane Maynard, Director of the Cincinnati Zoo & Botanical Garden.  “We are extremely proud to be part of this conservation program since 1999 and excited to welcome “Woodstock” to the Cincinnati Zoo.”

The Cincinnati Zoo is one of only two facilities outside of Florida to participate in the USFWS’ Manatee Rescue, Rehabilitation and Release Program.  This Program began in 1973 with the mission of rescuing and rehabilitating distressed and injured Florida manatees.  The fundamental purpose of the program is to release these rehabilitated manatees back into their wild habitat.

Manatees can live up to 60 years of age. However, human activities throughout the years have accounted for about one-third of the known manatee deaths each year with watercraft collisions comprising the greatest human-related threat. Most adult manatees bear permanent scars from watercraft propeller strikes.  In January of 2010, the Florida Fish and Wildlife Conservation Commission's (FWC) Fish and Wildlife Research Institute (FWRI) reported a preliminary count of 5,076 manatees statewide. This aerial survey is the highest population count since surveys began in 1991. Unfortunately, the number of known mortalities continues to increase.

where to buy cigarettes