After 17 years underground, one of the largest broods of periodical cicadas is set to emerge!

All of your cicada questions will be answered in this new blog!

Cicadas are large, flying insects, typically known for the loud buzzing sound that males produce in order to attract female mates. These insects spend most of their lives underground and a small number of annual cicadas emerge each year. However, every so often, a massive number of periodical cicadas will all come up out of the ground at once, a sight that is hard to miss.

The 17 year cicada is back in 2021! We understand the thought of billions of cicadas emerging can be worrisome, but the Zoo is here to help educate about this phenomenon! The cicada’s only purpose: courtship, mating and hatching the next generation of cicadas. After tunneling their way out of the ground near tree trunks, they’ll crawl up trees, or things they mistake for trees and shed a thin shell from which they emerge as Technicolor animals with big orange eyes and wings. The males will start mating songs that reach up to 100 decibels. That’s the sound of a chain-saw, a lawnmower, or a jet overhead. Adult cicadas die after mating. Females lay 10-2o eggs, stick their eggs into the branches of trees, then pass away. The eggs hang out for a while, then hatch, and the nymphs fall to the ground and dig down to a nice tree root, which they nibble on for 17 years until it’s their turn to emerge.

The last time this brood emerged was in 2004.

If you’re planting trees, wait until July. If your yard doesn’t get cicadas by the first week of June, it’s probably safe to plant in June. Otherwise, you can use netting to keep cicadas from laying eggs in the branches of fragile trees. It’s the egg-laying that does damage. They usually avoid garden and flowering plants because their stems aren’t strong enough for an egg nest.

People have been recording periodical cicada emergences for nearly four centuries. These maps have been critical in verifying the cicadas’ long life cycles and the relationships of the broods to each other.

Help us map the 2021 emergence with Cicada Safari! Your submitted photos will be used to determine the range of Brood X across several states.

What Do Cicadas Eat?

During their time underground, cicadas primarily feed on the juices and sap of tree roots. Once above ground, adults may feed on plant juices which can cause minimal damage to trees.

Periodical cicadas typically have black bodies, orange wing veins, red eyes and six legs. They also have antennae and are typically 1 to 2 inches in length. Annual cicadas, which emerge each year, are black and green.

How Long Do Cicadas Live?

Above ground, cicadas only live for a few weeks and Brood X will most likely be gone before Labor Day.

In large groups, the sound of cicadas can reach as high as 100 decibels and have been compared to the sound of electricity in some cases. So, how and why do they make noise? Using a special structure on their abdomen known as a tymbal, these insects produce a loud buzzing sound that is typically utilized to attract mates.

Where Do Cicadas Live?

Periodical cicadas spend the majority of their lives underground. When they emerge, they typically seek out trees where they can feed on sap and lay eggs in slits that the females cut on the ends of small branches. When it comes to where cicadas are found as far as geographic presence, Brood X in particular is expected to effect 15 different states, primarily in the mid-Atlantic and Midwest.

Another common cicada question is about whether or not they are dangerous. Although they may be loud, cicadas pose very little threats. While some people may ask do cicadas bite, rest assured that these insects do not bite or sting. Furthermore, they are not attracted to homes and typically stay outside.

What Do Cicadas Do?

Above ground, cicadas only live for a few weeks, during which they mate. The female cuts V-shaped slits in the bark of young twigs and lays about 20 eggs in each, for a total of 600 or more eggs. After approximately 6 to 10 weeks, the eggs will hatch and the nymphs will drop to the ground, burrowing into the ground to feed and develop for the next 13 to 17 years.

In areas of high concentrations of cicadas, they can cause cosmetic damage to trees when they lay their eggs on young tree branches. However, they actually provide a number of different benefits to nature. Cicadas can serve as food for many animals, including birds, reptiles, snakes and even spiders. When underground, the nymphs construct tunnels that help to aerate the soil and allow for tree roots to get more access to nutrients and oxygen for growth. 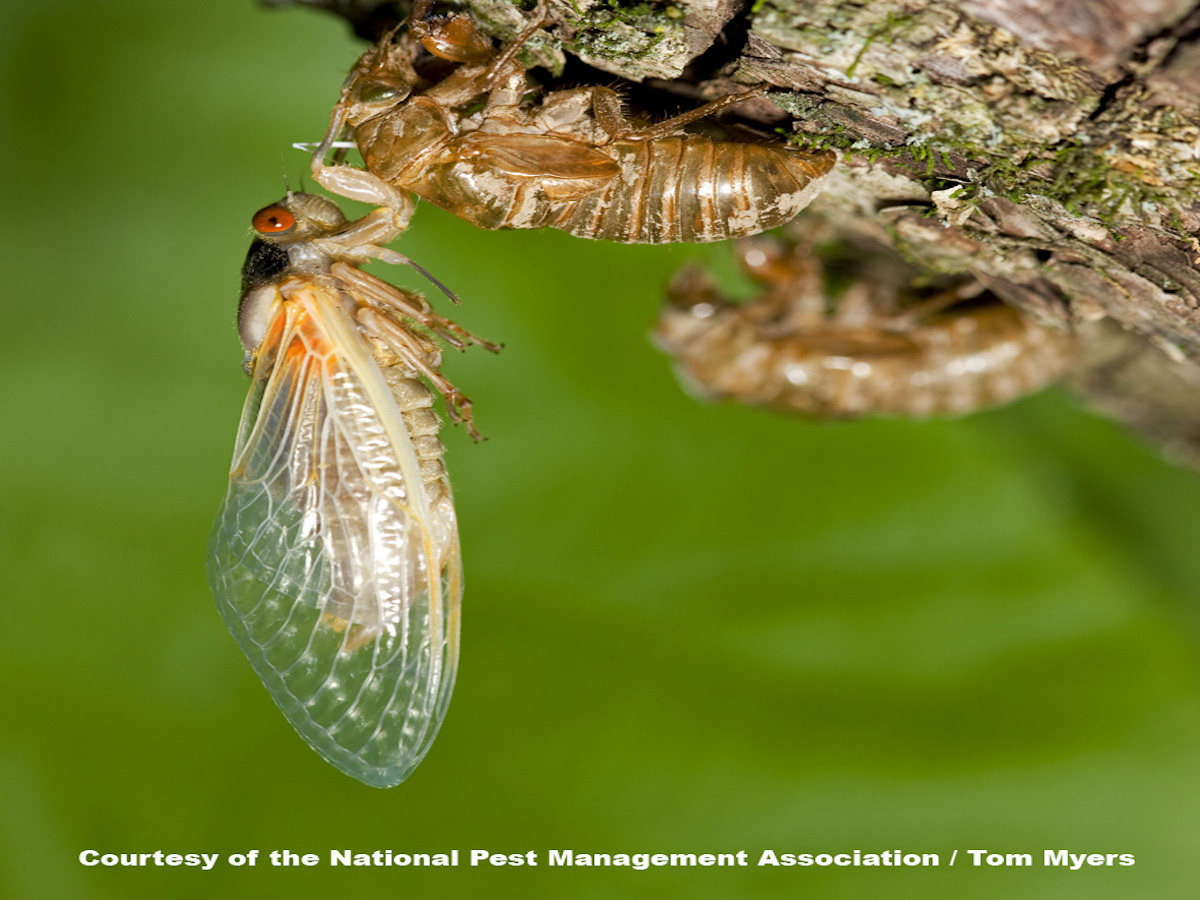