With fewer than 100 greater one-horned (GOH) rhinos in North American zoos and approximately 3,600 in the wild, successful breeding between rhino pairs is important to maintain genetic diversity necessary to keep a population healthy and self-sustaining.  Unfortunately, natural breeding attempts sometimes fail with GOH rhinos in managed breeding programs because they can become aggressive with each other, and in confined spaces, aggression between such large rhinos quickly becomes dangerous.  Therefore, the genetic management of this species can be challenging.

To overcome this obstacle to GOH breeding, CREW scientists started studying the GOH reproductive physiology in 1997, and eventually developed reproductive monitoring tools and artificial insemination procedures that resulted in the first GOH calf produced by AI in 2010.  Since then, half a dozen GOH births have taken place following AI and almost all have been produced with sperm that had been cryopreserved and stored in CREW’s CryoBioBank for up to ten years.

It is now possible to use the valuable GOH semen samples in CREW’s CryoBioBank to facilitate the genetic management of Indian rhinos on a national and even global scale. 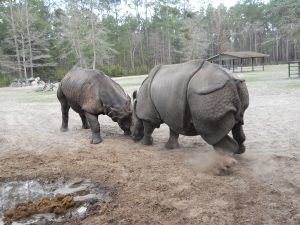