CREW’s CryoBioBank® contains one of the world’s most valuable rhino sperm banks. Frozen semen samples from the most genetically valuable Indian rhinos in North America and the first cryopreserved Sumatran rhino semen in the world are just a few examples of the important samples stored in CREW’s CryoBioBank®.

Furthermore, CREW scientists have been able to “rescue” live sperm from rhinos that have died. These samples will prolong the genetic lifespan of the individual animals since offspring can be produced by artificial insemination decades after the animals have died. 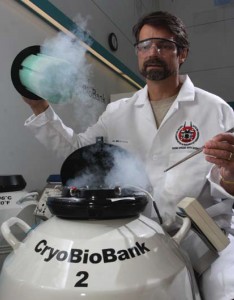