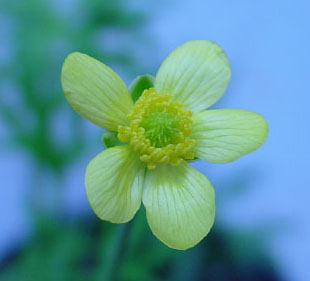 Endangered plants propagated by the Zoo’s Center for Conservation and Research of Endangered Wildlife (CREW) are being outplanting to bolster their wild populations across the United States. By combining the laboratory strengths of CREW with the field expertise of collaborators in botanical gardens, governmental agencies, and non-profit organizations, the work at CREW is being integrated into conservation efforts for species recovery and demonstrating that tissue culture propagation can be an important tool for conservation and restoration.

Added to the endangered species list in 1989, the Autumn buttercup (Ranunculus aestivalis) is one of the rarest plant species native to the western United States.  For many years, it was known only to exist on a single preserve in Utah owned by The Nature Conservancy (TNC). It is a wet meadow perennial that grows up to two feet tall and produces bright yellow flowers.  Recently, a second population has been located nearby on private lands.

With the goal of restoring the population on TNC land, in the early 2000s, CREW propagated Autumn buttercup plants through tissue culture and sent them to the Arboretum at Flagstaff for acclimatization over several years. There they grew into robust, healthy plants in soil, ready to take on the dry winds and heat of their new Utah home.

In 2007, buttercups produced at CREW were outplanted on the preserve. In June 2013, 350 more were planted. The new planting has 14 sites, seven each in grazed and ungrazed areas, and half the plants at each site were protected from herbivores by caging. Water availability and initial plant size were recorded for each plant. The size of the small mammal population in the area was also studied. These data were evaluated by faculty and students at Weber State University.  They found that caging and grazing both significantly increased survival of the reintroduced plants.

The next outplanting, scheduled for 2017, will include 750 plants propagated at CREW using tissue culture and 250 plants grown from seed at the Arboretum at Flagstaff.

A perennial herb with small, white flowers, the Cumberland sandwort clings precariously to the sandy soil of sandstone rock formations in the Cumberland Plateau of southern Kentucky and northern Tennessee. It is endangered, in large part due to trampling by hikers and people scavenging for Native American artifacts. CREW has been working with the U.S. Fish & Wildlife Service to help preserve and protect this little plant.

In 2005, 77 Cumberland sandwort (Arenaria cumberlandensis) plants propagated at CREW were outplanted in the Daniel Boone National Forest in collaboration with the U.S. Forest Service. Plants were planted in different areas of the rockhouse, in order to evaluate the microhabitats within the rockhouse, which differed in light and moisture levels. For over 10 years the site has been monitored by the U.S. Forest Service.  Plants at several of the microsites have grown and reproduced well, indicating the viability of these methods, should they be needed to help preserve the species in the future. A genetic study is underway to analyze the genetic diversity of this new, experimental population.

Avon Park harebells (Crotalaria avonensis) is a small legume known from only three populations in south central Florida. It is specifically adapted to the sandy scrub habitat of the Lake Wales Ridge. This land is desirable for development and agriculture and much of the original habitat has been lost.

In 2012, 84 plants propagated by CREW and acclimatized by Bok Tower Gardens were planted by Archbold Biological Station researchers at a protected site. All of the plants died back, but a number of the plants were starting to regrow in 2013. The restoration is a collaborative effort of CREW, Bok Tower Gardens, and Archbold Biological Station, with funding from the U.S. Fish & Wildlife Service.

In 2012, 75 plants propagated by CREW were planted at an experimental site near Eastern Kentucky University. Since then, additional plants propagated at CREW have been outplanted at various sites in Kentucky.  Funding and coordination of the project comes from the Kentucky Fish & Wildlife Service and Kentucky Natural Heritage.