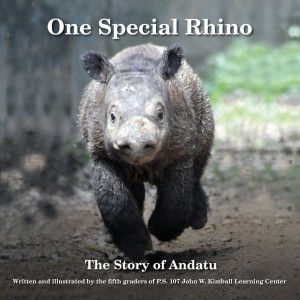 As many elementary-school children prepare to graduate this summer, the fifth graders of PS 107 John W. Kimball Learning Center in Park Slope, Brooklyn, are working on an even bigger challenge.  They have just become published authors as a way to help save endangered rhinos.  Their book, One Special Rhino: the Story of Andatu, a yearlong project which they wrote and illustrated, is now available on Amazon.com.

In the book, Andatu, the only Sumatran rhino ever to be born in zoos in Indonesia, tells the story of his life, describes the plight of being critically endangered and calls on young readers to help rhinos.  There are only 100 Sumatran rhinos remaining in the wild.

To create the book, the 5th graders met in workshops throughout the school year.  They read research materials about Sumatran rhinos.  By Skype, they interviewed the program director of the International Rhino Foundation, which is dedicated to the survival of the world’s rhino species through conservation and research.  Then they wrote the book as a series of first-person accounts which were re-assembled into a narrative.  In separate workshops, the children illustrated sections of the book.  The project involved all 84 fifth graders. 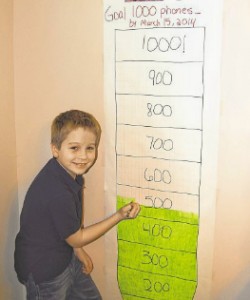 Nine-year-old Brady Delaney spread the word about his Cell Phone Collection Campaign by creating posters and hanging them around his community. He distributed fliers at schools and churches and put out phone collection boxes. His mom helped him create a Facebook page and video to tell more people about the campaign. Three news articles were published highlighting his efforts and people started mailing him cell phones from all over the place!  Read Alexandria Recorder Article
4th Grader from Dulles Elementary 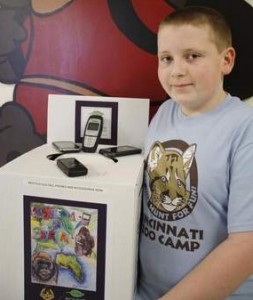 Jack McSwiggin, a fourth-grader at J.F. Dulles Elementary School, is working to raise money for his school through a contest sponsored by the Cincinnati Zoo & Botanical Garden. McSwiggin is collecting old cell phones from community members as part of the zoo’s Go Bananas Challenge. Read Cincinnati.com Article
6-year-old, Alaina, leading local effort to save gorillas 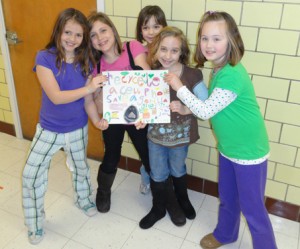 After a visit to the Cincinnati Zoo, Alaina decided she could help the Save the Gorillas campaign. The 6-year-old drew a picture and wrote a letter to her principal, Jean Hartman at Waynesville Elementary School, asking her to “set up a recycling program in the office” for cell phones.

Alaina’s letter led to some improvised lessons in her second grade class and launched a district-wide effort to collect old cell phones.

Alaina and her classmates created fact sheets about mountain gorillas in Eastern Congo, where the mineral coltan is heavily mined to be used for cell phone batteries.

Alaina said she has learned that gorillas like to eat plants, typically 40 pounds a day; they like to take naps; their babies can weigh 4 to 5 pounds; and they can grow to weigh more than 400 pounds.

Alaina said recycling cell phones is important because that means the gorillas won’t have to move.

“If they have to move, they might get cold and die. They might not get the plants they need,” she said.

Her teacher, Amanda Johnson, said the initiative provided an opportunity for the students to do some research about gorillas and has given them a “real world application” for classroom lessons.

“The kids have been extremely engaged because they’ve taken ownership of the project. It’s been a lot of fun,” Johnson said.

Recycling cell phones can not only lessen the impact of mining on gorillas and their habitat, it can keep the local environment clean.

Cell phones contain other hazardous metals that are harmful to people’s health, including antimony, arsenic, beryllium, cadmium, copper and lead, according to the Cincinnati Zoo’s website.

Saint James School in White Oak collected more than 800 cell phones and garnered an amazing 30,000 votes for their idea to collect phones and won the online voting challenge! This comes with a $1,000 prize! As promised, the students from the homerooms who collected the most cell phones were able to throw pies at their teachers.  See WLWT story… For more pictures, click here! 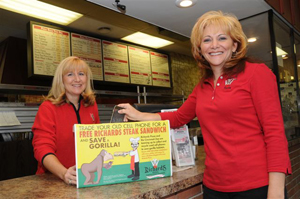 If you want something done, ask Gayl Underwood to do it! In addition to being the owner of Richard’s Pizza in Hamilton, Ohio, Gayl is also a star student in our Advanced Inquiry master’s degree program.

“Our staff had a great time collecting the cell phones! It’s easy for any business to get involved and it feels great to be able to contribute in some way to the conservation efforts at the Zoo.

We collected 1712 phones!  Again, we had a great time and we were glad we could help.” 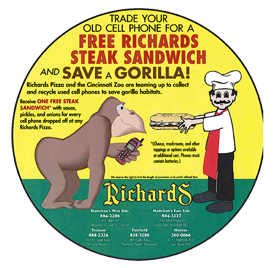 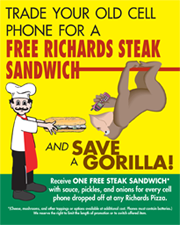 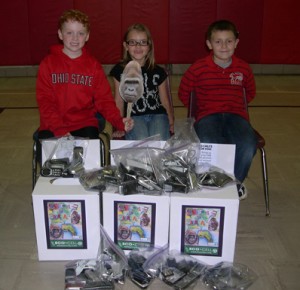 Quinn was part of the Zoo’s 2011 spring break camp. His group recycled the most phones that week so they won.  He went home and watched a special on tv regarding lions being shot and the story of the farmers.

Quinn got very upset and was talking with his father about how they should tell everyone about it and was super distraught.  His father talked to him and suggested instead of getting angry to take positive steps and get involved.

He (with help from his mother) constructed this letter and took it to his teacher and discussed the program with his principal.  He now has not just his class participating but also the rest of his school. They are working on a 2 week campaign, with a goal to collect 300 phones.