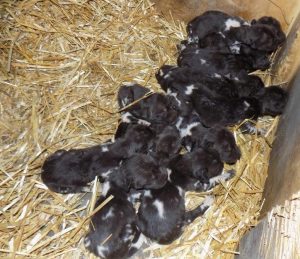 CINCINNATI, OH (October 28, 2016) – The Cincinnati Zoo & Botanical Garden’s painted dog pack grew from four to sixteen last week when four-year-old African painted dog “Imara (ee-MAH-rah)” gave birth to a dozen pups!  It’s not the first time she’s had her hands full. In January of 2015, Imara produced and raised a litter of ten pups with the help of her first mate, “Brahma (brah-muh).”   This time, in addition to having dad, “Kwasi,” as a helper, she’ll have assistance from “Lucy,” the only pup from the original litter that’s still in Cincinnati, and Kwasi’s brother, “Masai.”

“Kwasi and Masai lived in a multigenerational pack that numbered 23 dogs at one point, so they’re well versed in dog etiquette. They witnessed the birth of at least one litter of pups and should be able to figure out their roles as father and helper,” said Christina Gorsuch, Curator of Mammals at the Cincinnati Zoo and Vice Coordinator of the African Painted Dog Species Survival Plan (SSP). “The social structure of African painted dogs is built around the raising of pups -the entire pack works together to ensure that the female and her pups have everything they need to succeed and survive. Just like in the wild, the members of our pack will help Imara by guarding the den box, regurgitating meat, and babysitting the pups when Imara leaves the den box.” 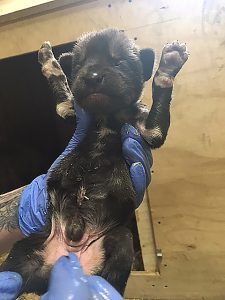 Kwasi and Masai, five-year-olds from the Perth Zoo in Australia, came to Cincinnati this summer with a breeding recommendation from the SSP. “We felt pretty confident that Imara would remain our alpha female but the male dogs were a bit of an unknown. Within minutes of the group’s introduction, Imara and Kwasi clearly identified each other as alphas and Masai and Lucy displayed all the appropriate submissive behaviors. It was really amazing to see Imara teaching Lucy all the proper dog social skills for meeting new males. In painted dog packs, usually only the alpha pair breed and produce pups. We are very happy to see our pack functioning in similar ways to their wild counterparts,” said Gorsuch.

The pack has access to the outdoor exhibit, but visitors are not likely to see pups for a couple of months. Imara will keep them in their behind-the-scenes den.

There are approximately 122 African painted dogs in 37 North American Zoos and 534 in Zoos worldwide. Gestation period is approximately 68-73 days and litters typically include 6 to 12 pups, but can number up to 20.  Pup survival rate is about 52%, making it a difficult population to sustain.

African painted dogs, known for their large, round ears and beautiful, multi-colored coats, could once be found all over Africa.  Today they are one of the most endangered carnivores on the continent, with fewer than 5,000 dogs concentrated in parts of southern and eastern Africa.

The Cincinnati Zoo supports the conservation of African painted dogs and other wildlife in southern Tanzania through the Ruaha Carnivore Project (RCP).  The RCP works with local communities to ensure the survival of carnivores and people in and around Ruaha National Park. The third largest African painted dog population lives in the Ruaha region and is also home to 10% of Africa’s lions.  The RCP documents the presence and location of wildlife species through community-reported sightings and photos taken by motion-triggered cameras, or camera traps.  The project aims to gather baseline data on carnivore numbers and ecology and work with the local communities to reduce human-carnivore conflict.

« Travel to Africa, the Galapagos Islands or Canada with the Cincinnati Zoo in 2017!
Holiday Tradition Continues with 34th Annual PNC Festival of Lights at Cincinnati Zoo »