Safari Through AFRICA at the Cincinnati Zoo

CINCINNATI – (June 24, 2013) The Cincinnati Zoo & Botanical Garden invites visitors to experience the spirit of Africa during the opening of Phase III of its newest exhibit – AFRICA – which opens to the public on June 29.  Africa will come alive as you journey through the breath-taking beauty of this open-vista exhibit, featuring some of the country’s most beautiful animals – the majestic African lion, the incredible African cheetah and the graceful Maasai giraffe, to name a few.

Coming face to face with the Zoo’s two new African lions through a 12-foot-tall glass wall in their new 11,200 square-foot exhibit is just one of many reasons to visit the Zoo when it opens Phase III of AFRICA.  Visitors can also see the Zoo’s herd of Maasai giraffe from the newly expanded Giraffe Deck which now features a covered Treehouse that reaches out into the giraffe yard, getting visitors closer than ever to the Zoo’s tallest residents.  In addition, there is a new Circle of Love animal encounter area where guests can meet unique African animals, from 10 a.m. – 3 p.m. daily, and a lush, new African cheetah exhibit which features quiet grasslands, a waterfall and a rippling creek passing through.  Right next to the cheetah exhibit guests will find Base Camp Café – the Zoo’s new African themed dining facility – featuring more indoor dining space and a new, largely expanded outside deck overlooking the African savannah.

“Because most people don’t get the opportunity to visit Africa, taking in the natural beauty of its landscape and wildlife, the Zoo has decided to bring Africa to you,” said Thane Maynard, Executive Director of the Cincinnati Zoo. “Africa is what most people think of when they picture wild animals in their natural habitat.  Our hope is for Zoo visitors to leave here feeling connected with Africa and feeling inspired to help save wildlife in wild places. We want them to experience their own African safari – one that they can enjoy in the near future and remember for a lifetime.”

As with all new construction, the Zoo will be pursuing LEED Gold Certification on AFRICA.  The AFRICA site restored almost the entire area into new habitat from an existing parking lot, making it green right from the start.  But, the exhibit also features underground storage tanks that hold roughly 400,000 gallons of water that is collected, stored and reused on site.  Additionally, the water is used for irrigation and supplying polar bears and sea lion exhibits with make-up water.  Thereby, reducing the load on the local sewer system and cutting the Zoo’s dependency on public water for irrigation and filling habitat pools.  The architect team, Cornette-Violetta, used light reflecting materials such as concrete paths and roofs to reduce the Heat Island Effect in AFRICA and reused as much of the existing restaurant structure as possible to reduce the amount of waste going to landfills.   Seventy-five percent of all construction waste in AFRICA was diverted from landfills and send to recycling centers and of the materials used to construct the buildings in the exhibit, 20% was recycled and 20% were regional.

In addition, the Base Camp Café recently became GRA 4-star certified (with the highest points in the country), making it the greenest restaurant in the country, with features like a greenhouse with fresh produce that will be used daily in the restaurant, local food sold and served daily and composting of nearly all of the restaurants waste.  The Base Camp Café is one green feature that visitors will not only be able to see, but also taste. 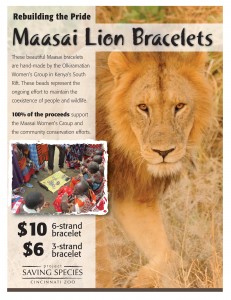 While in AFRICA Zoo visitors will have an opportunity to help one of the Zoo’s conservation mission’s back in Africa. Beaded bracelets, made by the Olkiramatian Women’s Group that manage the Lale enok Resource Center in the South Rift of Kenya, will be sold in the AFRICA exhibit.    These bracelets are an unchanging symbol of the Maasai – a tangible cultural icon and a means to maintaining healthy livelihood.    The Lale enok Resource Center provides the community with important information including good places to graze cattle, recent lion activity, water sources, etc. The Resource Center also houses lion conservation research teams that track and follow the resident lion prides using GPS collars provided to them by the Zoo. These collars help the researchers alert the community about where the lions are, which helps the herders keep their cattle safe and reduces the number of lethal conflicts between lions and humans. So, they also protect lions.  The Women’s Group not only uses money from the sale of bracelets to support the Resource Center (and hence the lion research), but also to support tuition for Maasai girls at local schools.  The Resource Center focuses on improving human health and livelihoods while also helping protect wildlife.

Phases I & II of AFRICA, the first of five phases, were completed in 2010 and included an expanded yard for the Maasai giraffe, a new greater flamingo exhibit, and a new and improved Cheetah Encounter where guests witness cheetahs doing what they do best – running! The Zoo is still in the midst of a capital campaign to complete Phases IV and V, needing roughly $12 million, which will bring Zebra, gazelles and some of Africa’s most beautiful birds to the Savannah portion of the exhibit.  The Zoo will finish Phase V with a much anticipated hippo exhibit – one of the most remarkable and fearsome creatures in all of Africa.  The hippo area will give visitors a dramatic experience by providing both above and below water viewing!  The first three phases of AFRICA have been made possible with the generous support from the Marge & Charles J. Schott Foundation, Ida & Zoltan Dobsa, The Louis & Louise Nippert Trust, the Harold C. Schott Foundation, Western & Southern, and Harry & Linda Fath.

“The Cincinnati Zoo is a tremendous community asset that Western & Southern is proud to support,” said John F. Barrett, chairman, president and chief executive officer of Western & Southern Financial Group. “We have a deep commitment to initiatives and projects that make us proud to call Cincinnati home and that help attract more people and businesses to our community. AFRICA is yet another example of what makes Cincinnati a world-class city.”

Visit AFRICA – opening June 29 at the Cincinnati Zoo.  It’s closer than you think!  AFRICA is free with regular admission.