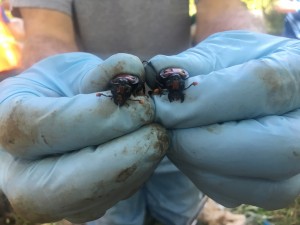 CINCINNATI (May 25, 2016) – For the fourth year in a row, staff and volunteers from the Cincinnati Zoo & Botanical Garden released federally endangered American burying beetles (ABB) at the Fernald Preserve. This year, 110 pairs that were carefully matched by the Association of Zoos and Aquariums (AZA) Species Survival Plan (SSP), were placed into holes in the ground to breed. The ABB was once found everywhere in the eastern United States but because of issues like habitat destruction they are now only found in a few states. The Cincinnati Zoo has partnered with the US Fish & Wildlife service and the Fernald Preserve to help bring this unique, but important, endangered insect back to Ohio.

“After this year we will have placed over 600 adult ABBs at Fernald in an attempt to found a wild population,” said Head Insectarium Keeper Mandy Pritchard.

See video from the first release in 2013 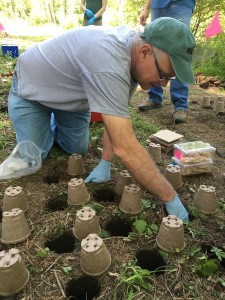 The Fernald Preserve is the former site of a uranium processing facility that ceased operations in 1989 and underwent a superfund cleanup. They spent a few billion dollars stripping the soil and replacing the habitat at Fernald and it is still owned and managed by the Department of Energy. It is now home to hundreds of species of birds, mammals, reptiles, amphibians and of course invertebrates. It is a famous bird watching destination that has attracted visitors from all over the country. The Zoo picked this location for the endangered ABB reintroduction because of its flourishing wildlife.

American burying beetles now inhabit only 10% of their historic range. The reasons for their decline include habitat degradation, the extinction of the passenger pigeon and increased competition for prey from mammalian scavengers. In 1986, the International Union for Conservation of Nature (IUCN) designated ABBs as endangered and a short time later the U.S. Fish and Wildlife Service initiated a project to save the species from extinction. The idea was to collect a limited number of beetles from the wild, establish a population in zoos and eventually reintroduce ABBs to their former habitats.