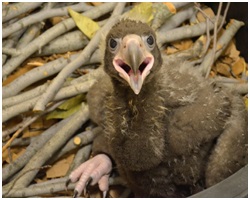 CINCINNATI (May 28, 2015) – The population explosion continues at the Cincinnati Zoo & Botanical Garden. A Steller’s sea eagle, the Zoo’s first Raggiana bird of paradise chick, and three spur-winged lapwings are among the significant hatchings reported in the past two weeks.

Steller’s sea eagles are one of the rarest raptors in the world. They are twice the size of and much more aggressive than their close relative, the bald eagle. The Cincinnati Zoo was the only Zoo in the U.S. to breed this species successfully until the Denver Zoo hatched a chick last year. Cincinnati has now bred three pairs & produced 12 chicks in cooperation with the Species Survival Plan (SSP). There are currently 22 Steller’s sea eagles in 11 North American institutions.

Chick watch began on April 29 when Aviculture staff noticed the sea eagle parents looking down at their nest more frequently. A chick was first observed on May 3rd and by May7th it looked to have doubled in size. Their incubation period can last 39 to 45 days and they lay one to three eggs (but only one chick usually survives).

As of 2009, the Steller’s sea eagle population was estimated at 5,000 birds worldwide, but that number is dropping. Although legally protected in Russia, Japan, China, and South Korea, other threats to these rare birds include fossil fuel energy developments, wind farms, pollution, habitat loss, hunting, and possibly global warming. 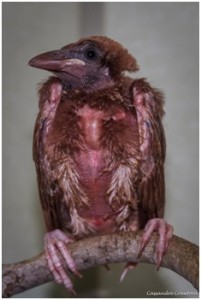 The Cincinnati Zoo hatched its first Raggiana bird of paradise chick on May 2. To date, San Diego, Honolulu, and Miami are the only Zoos in the U.S. to produce Raggiana bird of paradise chicks that lived at least 30 days. The Cincinnati Zoo’s chick has almost reached that milestone and keepers are optimistic that it will stay in good health. The chick’s 13-year-old father is the most genetically-valuable of his species – meaning his genes are the most needed in Association of Zoos and Aquariums (AZA) collections to keep the population as healthy/genetically diverse as possible.

The Cincinnati Zoo has mimicked the life strategy of these birds in the wild.  Males get together and show off in a central tall tree (called a “lek”) while the females gather around to view the spectacle and select a mate.  They breed and she flies off to build her nest and raise her chick all by herself while the male goes back to dancing! 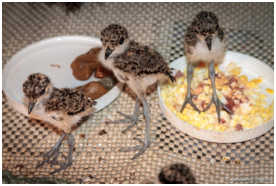 Birds of paradise chicks often do well as hand-reared youngsters. They eat mostly insects, pinkie mice pieces, and papaya and are extremely intelligent birds that can learn to mimic many noises and sometimes speech. All birds of paradise species are protected in Papua New Guinea from the large-scale hunting that occurred there in the late 1800’s and nearly drove several species to extinction. Their feathers and skins were exported by the thousands for fashionable hats. Their biggest concern now – like for so many – is rainforest habitat loss.

Three spur-winged lapwings also join the Zoo Babies list. Although they are not rare at all in the wild, they are still special to the Cincinnati Zoo and genetically-significant offspring from first-time parents.