CINCINNATI (March 28, 2016)– Since 2010, three Brazilian ocelot kittens, females “Milagre,” “Ayla,” and “Revy,” have been produced using artificial insemination (AI) techniques developed and performed by scientists from the Cincinnati Zoo’s Center for Conservation & Research of Endangered Wildlife (CREW). All three of these genetically-valuable ocelots have gone on to produce offspring of their own as a result of natural breeding. The most recent kitten was born at the Santa Ana Zoo in December to Revy, the last of the three AI offspring to reproduce.

“Without the AI option, Milagre, Ayla and Revy – and all of their subsequent offspring – would have never existed and the long-term genetic viability of our Brazilian ocelot population would have been further diminished as a consequence,” said Dr. Bill Swanson, CREW’s Director of Animal Research and one of the world’s authorities on breeding endangered small cats. “Only 30 Brazilian ocelots exist in North American Zoos, and seven, or nearly one quarter of the population, were born as a direct or indirect result of AI. That’s strong evidence that biotechnology can play a major role in species conservation.”

In October of 2014, on a recommendation from the Ocelot Species Survival Plan (SSP), which makes breeding pairings based on each individual’s genetic importance to the population as a whole, Revy moved from the Cincinnati Zoo, where she was born, to the Santa Ana Zoo to breed with “Diego,” a male from Oklahoma City Zoo. Because Diego’s parents were imported from Brazil to the United States in 2006 (a process that took six years to plan & execute), Diego’s genetic lineage was considered critically important to establishing a sustainable, genetically-viable population.

“Revy and Diego are both extremely valuable to the ocelot SSP due to the multiple founder lines they represent. The fact that they are compatible and have produced a kitten through natural breeding is a significant step toward conserving this species,” said Swanson. “Our objective is to use AI when necessary to produce offspring that then can breed on their own.”

The SSP’s goal is to increase the Brazilian ocelot population in North American zoos from 30 to 125 individuals. In some cases, however, the SSP’s carefully selected breeding pairs fail to reproduce naturally, sometimes due to behavioral incompatibilities (as with Revy’s parents) or, occasionally, physical impairments (as with Milagre’s and Ayla’s mother).

CREW scientists perform many of the AI procedures with wild cats in the U.S. They focus primarily on five priority small cat species—ocelots, Pallas’ cats, black-footed cats, sand cats, and fishing cats—but Dr. Swanson has also aided in AI procedures on tigers, lions, and leopards, in the past few years. “We have become the go-to source for AI in cats, as well as rhinos and polar bears, because of CREW’s expertise and past success. All cat SSPs have pairs that are not reproducing on their own for various reasons, so we try to help out with other cat species as much as possible,” said Swanson.

In cats, AI has been used to produce offspring in 12 species (tiger, snow leopard, cheetah, clouded leopard, leopard cat, ocelot, tigrina, fishing cat, Pallas’ cat, golden cat, leopard, puma), but half of those AI births consist of only a single pregnancy.   Historically, cheetahs have been most successful, with about 13 AI pregnancies produced since 1991 (but none since 2003) followed by the ocelot (with 5 pregnancies).

Brazilian ocelots (Leopardus pardalis mitis) are becoming increasingly endangered in their native habitat due to human population growth and associated habitat loss and fragmentation. Brazilian ocelots have been classified as ‘vulnerable’ by the Brazilian government using IUCN Red List criteria. The Association of Zoos & Aquariums (AZA) established its first Species Survival Plans (SSP) for small-field cats, including the ocelot, in 2001.  Small sized cats, including the ocelot, have been severely neglected in both scientific and conservation circles, with little information on their natural history or conservation status in the wild.  Population projections indicate that several small cat species, including the ocelot, will see their genetic diversity reduced to dangerously low levels in zoos within the next 50 years.

Images below courtesy of AI: 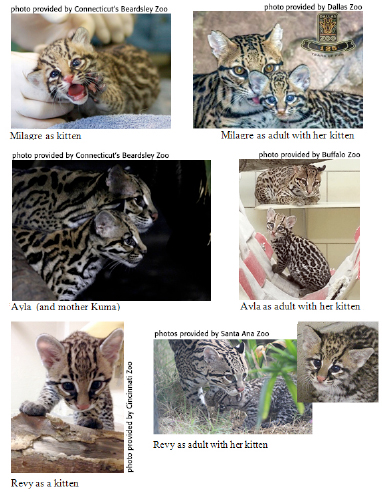