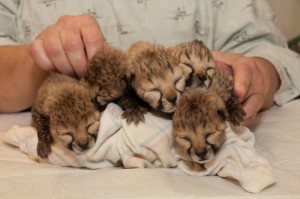 Link to video of cubs in the nursery

“The cubs were born under difficult circumstances,” said Dr. Campbell, Director of Animal Health at the Cincinnati Zoo.  “For puppies and kittens the vast majority of their passive immunity comes from their mom’s milk especially the colostrum.  Their immune systems are not developed very well at all at this time so they are unable to actively ward off infections.   We are doing all we can to keep them healthy and strong, but it will be a challenge for these cubs moving forward.”

The cubs (3 boys and 2 girls) were born at the Zoo’s regional cheetah breeding facility in Clermont County on March 8.  They were moved to the Cincinnati Zoo Nursery immediately where there’s been around-the-clock care with bottle feeding every three hours during the past ten days. 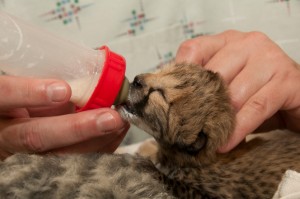 “This is only the third C-section I have been involved in during my 25 year career at the Cincinnati Zoo,” said Campbell. “The decision to do the procedure is complicated and involved discussion amongst the veterinary, curatorial and keeper staff.  The procedure went well.  Mom is recovering, and we’re working hard to put some weight on the premature cubs. Important benchmarks for survival of these cubs are the first week and month of life.”

The cubs will remain in the Nursery for at least 8-12 weeks.  Visitors may be able to catch a glimpse of the cubs through the Nursery windows, but much of their critical care will take place behind the scenes.

“These events are always a group effort with everyone knowing what their role is and doing it,” said Dr. Campbell.  “Zoo Veterinarian Dr. Jenny Nollman was the surgeon, Dr. Greg Levens was assisting and I was doing the anesthesia.  The veterinary technicians and five members of the Zoo Animal staff were helping with the cubs. We are always as well prepared as we can be and we discuss these procedures at length before they happen.”

Cheetahs are endangered, and their population worldwide has shrunk from about 100,000 in 1900 to an estimated 9,000 to 12,000 cheetahs today. The Cincinnati Zoo has been dubbed “The Cheetah Capital of the World” because of its conservation efforts through education, public interpretation, and the zoo’s cheetah breeding program. In total, there have been 54 cheetah cubs born at the Zoo’s Mast Farm since it opened in 2002.