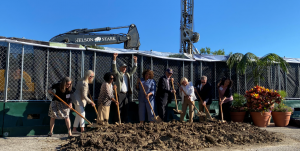 CINCINNATI, OH (June 15, 2021) — Board members, donors, and local officials gathered at the Cincinnati Zoo & Botanical Garden this morning to grab shovels and officially break ground on the BIGGEST construction project in Zoo history!  Elephant Trek, the crown jewel of the More Home to Roam capital campaign that the Zoo launched in 2018,  is one step closer to becoming a reality.

“Elephant Trek is the result of a BIG vision that represents our Zoo’s role as a champion of Asian elephant conservation, both here in the U.S. and in the places these animals live around the world,” said Francie Hiltz, Chair of the Zoo’s Board of Trustees, in her opening remarks at the groundbreaking ceremony.  “By creating a BIGGER space for a BIGGER herd of elephants to thrive, we are making a BIG commitment to Asian elephant breeding and conservation that will demonstrate to our visitors the power and beauty of co-existence for animals and humans.” 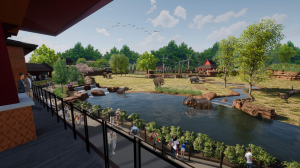 Capital campaign fundraising was paused last year, when the Zoo was closed for three months due to COVID, in order to concentrate on raising emergency operating funds. As a result, the Zoo tabled its original plan to build a parking garage and bumped Elephant Trek to the top of the priority list.

Elephant Trek, which will be five times the size of the Zoo’s current elephant habitat, is slated to open in 2024 and will eventually be home to a multi-generational herd of 8-10 Asian elephants. 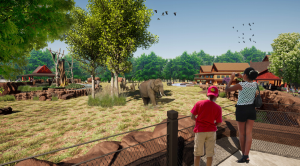 “BIG donations have made Elephant Trek possible.  Harry and Linda Fath kicked off the campaign in 2018 with a $50 million matching gift, and a recent gift from The Farmer Family Foundation will fund a multi-purpose elephant barn in the new habitat,” said Cincinnati Zoo director Thane Maynard. “Donations of all sizes make a difference and mean a lot to us and the elephants.”

The Zoo is being smart about how it spends the money it has raised.  Elements built into Elephant Trek, including stormwater tanks that will hold 1 million gallons of water, will actually help the Zoo reduce expenses and achieve its goal to be Net Zero by 2025! It also has plans to convert elephant poop, and the rest of the Zoo’s organic waste, to a soil supplement that will help it grow the food that the elephants eat! 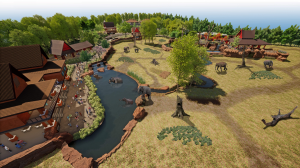 Recognizing that it’s going to take more than the shoveling efforts of donors and the talents of the Zoo’s full-time facilities team to make this BIG dream come true, the Zoo has engaged Jostin Construction to provide additional capacity to tackle the Elephant Trek project.  This partnership will bolster its workforce needs and elevate diversity and inclusion efforts at the Zoo.

If you want to be a part of something BIG, donate to Elephant Trek today!  More information can be found in this project recent project update.

« Free Admission for Guests Who Get Vaccinated at the Cincinnati Zoo on June 15!
Cincinnati Zoo Leader Receives Prestigious 2021 USGBC Award »