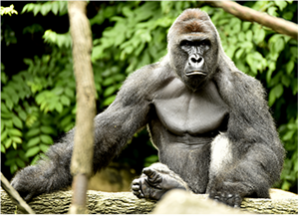 CINCINNATI (May 29, 2016) –The Cincinnati Zoo & Botanical Garden family is in mourning today and trying to process the death of 17-year-old gorilla Harambe. The gorilla was killed yesterday in order to save the life of a child who climbed through a public barrier at Gorilla World and dropped fifteen feet into the exhibit’s moat, which contained a foot of water.

“We are heartbroken about losing Harambe, but a child’s life was in danger and a quick decision had to be made by our Dangerous Animal Response Team,” said Zoo Director Thane Maynard. “Our first response was to call the gorillas out of the exhibit. The two females complied, but Harambe did not. It is important to note that with the child still in the exhibit, tranquilizing the 450-pound gorilla was not an option. Tranquilizers do not take effect for several minutes and the child was in imminent danger. On top of that, the impact from the dart could agitate the animal and cause the situation to get much worse.”

Zoo staff and Cincinnati Fire Department (CFD) were the first responders on the scene. According to a CFD incident report, the gorilla was violently dragging and throwing the child. Minutes later, the Zoo’s Dangerous Animal Response Team arrived and made the difficult decision to put the gorilla down to save the child. The response team includes full-time keepers, veterinarians, maintenance, Zoo leadership and security staff members. All members are trained and certified annually by the Hamilton County Sheriff’s Office.

The four-year-old boy was transported to Children’s Hospital Medical Center (CHMC) after being removed from the exhibit. The child was released from CHMC Saturday night.

“We’re glad to hear that the child is going to be okay. We’re touched by the outpouring of support from the community and our members who loved Harambe,” said Maynard. “The Zoo family is going through a painful time, and we appreciate your understanding and know that you care about our animals and the people who care for them.” 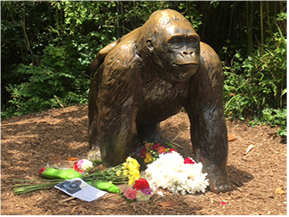 Gorilla World opened in 1978, and this is the first time there has been a breach. The exhibit is inspected regularly by the Association of Zoos & Aquariums (AZA) and the United States Department of Agriculture (USDA) and adheres to safety guidelines.

The Zoo is home to ten western lowland gorillas. There are about 765 gorillas in zoos worldwide including approximately 360 in the Association of Zoos & Aquariums (AZA) Species Survival Program (SSP) for this species. Western lowland gorillas are critically-endangered in the wild, with less than 175,000 individuals. Due primarily to habitat destruction caused by logging, mineral mining and agricultural expansion, wild gorilla numbers continue to shrink. The Cincinnati Zoo supports wild gorilla conservation efforts like the Mbeli Bai Study in Nouabalé-Ndoki National Park in the Republic of Congo.