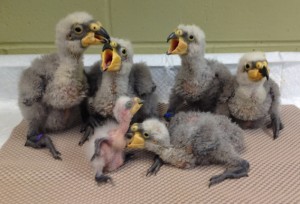 CINCINNATI, OH (April 10, 2015) – The Cincinnati Zoo & Botanical Garden is excited to announce that it has received the Plume Award for Noteworthy Achievement in Avian Husbandry from the Avian Scientific Advisory Group (ASAG).

The Cincinnati Zoo’s kea program consists of a successful breeding program, an interactive exhibit, and a partnership with Kea Conservation Trust (KCT) in New Zealand. Cincinnati holds the largest collection of Kea (Nestor notabilis) in North America and is home to 15 of the 41 birds present in the Association of Zoos and Aquariums (AZA) accredited institutions. Locally, nationally, and internationally Cincinnati works to improve kea husbandry standards and reproductive success.  Their kea program also aims to increase public awareness and participation in conservation initiatives, and to raise funds to support kea conservation.

“I couldn’t be more excited about Cincinnati Zoo’s success with breeding kea this year! This flock includes a number of genetically important birds and the population has been struggling with breeding in recent years, so these chicks represent a great move in the right direction. Cincinnati’s unique way of housing and managing kea in a large flock has proven to be a great combination of guest experience and breeding opportunity for this species,” says Jessica Meehan, AZA Kea Red Program Leader Population Manager.

During the last three years the Cincinnati Zoo has successfully hatched 13 chicks, more than any other zoo in North America. 2014 was especially bountiful with the fledging of six chicks (pictured above.) During the summer, the kea flock shares the exhibit with several other avian species, including Nicobar pigeons, pied imperial pigeons, magpie geese, and cape barren geese. Most recently the Aviculture department has formed a partnership with the Zoo’s Lindner Center for Conservation and Research of Endangered Wildlife (CREW) to start a foundation in kea reproduction research.

“The international community has great interest in kea because of their unique ecology, amazing intelligence, and charismatic personalities. There is no other avian species on Earth quite like them,” says Robert Webster. “The Cincinnati Zoo & Botanical Garden recognizes that kea are a wildlife gem and that their loss would be tragic. We have attempted to do everything in our power to ensure kea are around for future generations.”

You can view the kea in the Free Flight Aviary next to the Wings of the World bird house at the Cincinnati Zoo.