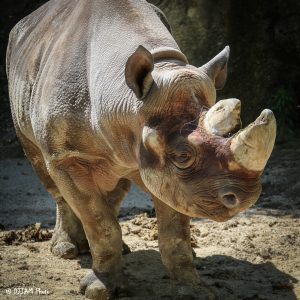 CINCINNATI, OH  (June 16, 2017) –  Cincinnati Zoo & Botanical Garden’s black rhino Faru might be a shoe-in for father of the year, and his calf hasn’t even been born yet.  Hoxworth Blood Center, University of Cincinnati has been processing blood collected from the 12-year-old rhino for the past nine weeks to have on hand just in case the calf, due in July, has to be hand raised.

“We’re banking plasma from Faru as a safety in case first-time-mom Seyia is not able to care for her baby,” said Christina Gorsuch, Cincinnati Zoo Curator of Mammals. “The hope is that the calf will nurse and be raised by her mom, but some inexperienced moms aren’t sure what to do with their offspring and humans have to step in to provide nourishment and warmth.  If that happens this time, we’ll be able to give the calf the best start possible, with help from her dad.” 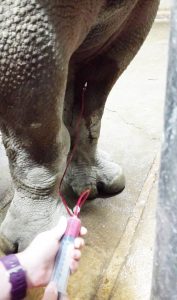 Historically, large volume collections like the Zoo is doing with the black rhino would only be possible with an anesthetized animal. “Thanks to our talented and patient operant conditioning team, Faru remains awake and voluntarily stands for blood draws.  Sometimes he cooperates for fifteen whole minutes.  He seems to like all the attention and treats that he gets during the procedure,” said Gorsuch.

Plasma, which contains immunoglobulins that help boost the immune system, from a parent is ideal, but as long as it’s from the same species it can be used. The Zoo has been collaborating with Hoxworth Blood Center, University of Cincinnati to bank plasma since 1998 when it was expecting its first elephant calf.  Since plasma can be frozen and kept indefinitely, those samples still exist and could be used in the future if needed.

Banked plasma from two cheetahs, collected in 2002 and 2016, was used last year when the Zoo had to hand raise prematurely-born cheetah cubs. “The cubs had many health challenges, including a compromised immune system.  Giving them plasma infusions might have made the difference between life and death,” said Gorsuch.

The Association of Zoos and Aquariums’ (AZA) Species Survival Plan (SSP), the body that manages populations in Zoos, determined that Faru and Seyia were a good genetic match and recommended that they breed.  Faru came to Cincinnati from Atlanta in the summer of 2015 and was introduced to Seyia.

Black rhinos, native to Eastern and Central Africa, have two large horns made of keratin that they use for defense, intimidation, and feeding. An adult can weigh anywhere between 1,760 and 3,080 pounds, and newborns (calves) weigh between 73 – 121 pounds. They breed year round and have a 15-month gestation period. The species is Critically Endangered due to poaching and habitat loss.  Fewer than 5,000 black rhinos remain in the world, and approximately 115 are managed by the SSP in North American Zoos.