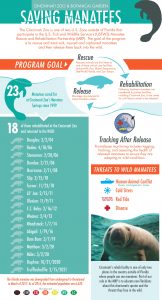 CINCINNATI, OH (March 24, 2021) – Three young manatees arrived at Cincinnati Zoo & Botanical Garden’s newly-renovated Otto M. Budig Family Foundation Manatee Springs early this morning, where they will be rehabilitated until they are ready to return to their native Florida waters.  The Zoo has been participating in the U.S. Fish & Wildlife Service’s Manatee Rescue & Rehabilitation Partnership (MRP) for the past two decades and has cared for 23 manatees, including the newest residents.

“We started renovating our manatee facility after our last two residents, Pippen and Truffleshuffle, returned to Florida in September of 2020 and stepped up the construction schedule so we could provide a home for these three orphans.  We were originally slated to receive two animals. The third animal was added as result of the significant influx of rescued manatees at SeaWorld Orlando,” said Cincinnati Zoo curator Winton Ray.  “We look forward to helping these youngsters grow and eventually return to their native home.”

Two of the manatees already had names, Alby and Manhattan, and the MRP gave Cincinnati Zoo the opportunity to name the third.  The manatee team got creative and chose “SwimShady”, a play on the name of the song/nickname of rapper “SlimShady”. A gar named “Snoop Logg” is also a Manatee Springs resident! 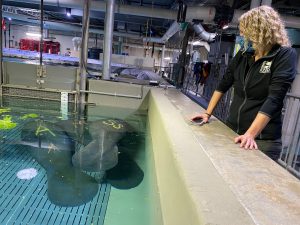 Eighteen manatees rehabilitated at the Cincinnati Zoo have returned to Florida waters.  Most recently, Truffleshuffle shuffled out near Apollo Beach in the Tampa Bay area.

“The goal of the MRP is to rescue, rehabilitate, and release manatees, and we’re honored to play a role in this important conservation work,” said Ray.  “In addition to rehabbing manatees, we get to educate and inspire visitors when they see these amazing creatures!”

Cincinnati Zoo is one of two facilities outside of Florida that provides non-critical care for manatees.   Providing second-stage care opens up valuable space at critical care facilities like SeaWorld Orlando and gives Midwesterners the opportunity to learn about these remarkable animals.

The new manatees will be visible in Manatee Springs starting this Sunday, March 28.  The Cincinnati Zoo opens daily at 10 a.m.  Earlier reservations are available for Zoo members. Reservations are required and masks must be worn while at the Zoo. For more information, visit www.cincinnatizoo.org.