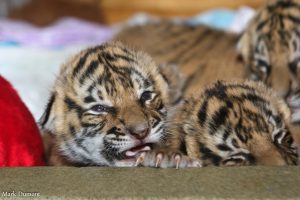 One gets helping hand from local chiropractor

“They’re fed by nursery staff six times a day and have already graduated from two to three ounces per feeding,” said Mike Dulaney, curator of mammals at the Cincinnati Zoo and vice coordinator of the Malayan Tiger SSP. “Before they open their eyes, they usually just eat and sleep.  Now that they can see where they’re going, they will start to become more active.”

One of the cubs, referred to as #1 until the cubs’ genders are known and names are given, is receiving special care from a local chiropractor to help it keep up with the others.  Soon after the cubs arrived in the Nursery, caregivers noticed that #1 was having trouble holding its head up.

“It was obvious to me that something wasn’t right.  The cub’s neck appeared to be stuck at an odd angle,” said Dawn Strasser, a 35-year veteran in the Zoo’s Nursery. “Massaging the neck muscles helped with the stiffness, but the cub was increasingly lethargic and not suckling well.”

Strasser reached out to Dr. Mark Sperbeck, a chiropractor who works on humans and animals of all sizes (from 3-pound tiger cub to 1,000-pound horse) and asked him to make a house call.  Three adjustments later, it’s difficult to see a difference between #1 and its litter mates. The neck and spine are back in place and the cub is eating well.  It’s actually a little larger than the other two.

According to Dr. Sperbeck, the cub’s top cervical bone (C1) was out of alignment. Since 95% of the body’s nerve impulses travel through this vertebra, he explained, it’s key to proper body function. “After the first adjustment, the cub slept for almost 24 hours and woke with improved mobility, strength and suckling ability,” said Strasser.

This is the first time that the Zoo has called in a chiropractor, but it has a long history of collaborating with medical experts from outside the Zoo. John the lion got a tooth pulled by local dentist Dr. David Sullivan just last week, Cincinnati Children’s Hospital has helped out with MRIs for various animals including Ali the aardvark, The Christ Hospital has assisted with gorilla ultrasounds and cardiac exams, and MedVet placed a feeding tube in a premature cheetah last year.

The cubs are being cared for in the Zoo’s Nursery and will move to Cat Canyon when they’re weaned and no longer require constant care.  Visitors should be able to see them playing and running around in their outdoor habitat in early spring.

Join us for a special Facebook Live from the nursery with the tiger cubs on Wednesday, February 22, at 11 a.m.